Home » Sports News » ‘If I had grown up in the UK, I would not be alive today’

Michael Holding is adamant about how life would have turned out for him had he grown up in Britain and experienced the racism that his colleague Ebony Rainford-Brent, the first black woman to play for England, endured as a child.

“I don’t think I would be alive today,” he says, ruefully. “As a young man, I was a bit fiery. I kicked a stump out of the ground in New Zealand, so can you imagine me going through what Ebony went through? No, I would not have made it.” 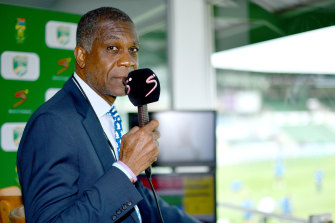 Michael Holding has written a book detailing his experiences with racism.Credit:Getty

Racism and its consequences have always weighed heavily on Holding. It is what prompted his passionate, angry, unscripted monologue last year – part of an award-winning package which also featured an emotional contribution from Rainford-Brent. Holding was contacted by sports stars such as Usain Bolt, Thierry Henry and Naomi Osaka, all of whom urged him to commit his thoughts to writing.

The result is a book, Why We Kneel, How We Rise, although Rainford-Brent’s testimony was too upsetting for her to read in the book, so Holding agreed to remove it. There is little cricket in the book, and it is not about sport. It is about racism in society, something Holding experienced while playing county cricket and on tour in Australia with the West Indies. He did nothing about the abuse at the time, and carries that guilt now. There is a rising anger in the book, which is well researched by Holding and his ghostwriter, Ed Hawkins, and he builds his argument relentlessly, as if he is still probing away at Geoffrey Boycott’s off stump, that education holds the key.

“Growing up in Jamaica, I didn’t experience racism. I experienced it every time I left Jamaica. Each time I experienced it I just told myself ‘this is not your life, I will soon be going back home’. And if I had made a stand my career would not have lasted as long, I would not have had a long television career. We have seen throughout history that black people who stand up for their rights and call out injustice are victimised. Mercy, if I had spoken out they would have said ‘another angry young black man, get rid of him’. I would have been another person on the dung heap.”

Holding is speaking from the Cayman Islands, where he lives during the English winter after selling his house in Florida. “I did not want to live in Donald Trump’s America. I know he is not president, but 74 million people voted for him.”

The “why we kneel” part of the book describes racism across the ages and the world. The sports stars add their own experiences: a young unknown Bolt being told by a shop assistant in London that he would not be able to afford a designer watch, Henry on taxi drivers in New York refusing his fare. Footballer Hope Powell speaks about excrement thrown at her front door as a child.

“I did not involve them so they could say what hard times they have had. I could find hundreds of people to describe bad issues they have been through. Interviewing them showed that whether you are a poor black person, or a rich black person, you still get affected by racism. People have said, why would Charles Barkley or Michael Johnson be worried, they are multi-millionaires, but if your skin is black you still get affected, especially in places where you are not known. Then they are right back to being ordinary black men.”

There are some bleak moments that are painful to read. “I sent a chapter to my sister and she said she could not read it. The ones about lynchings and dehumanisation, the picture of three black bodies hanging from the tree that was turned into a postcard. People posting it saying ‘Hi how are you, I am in Alabama’. There are bits I don’t want to read again.”

The most revealing cricket story is Holding’s retelling of the 1976 tour of England and a match at The Oval. Not the famous Test when Viv Richards hammered 291 and Holding scorched England with 14 wickets, but a county match against Surrey, when Clive Lloyd told his batsmen to spend time at the crease rather than chase down an achievable total. The West Indians in the crowd booed; the team were angered and could not understand why. 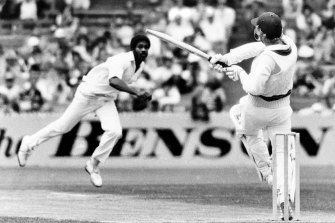 The man known as ‘Whispering Death’ sends one down to former Australian captain Kim Hughes in 1980.Credit:Bruce Postle

“I did not get it until I was mixing in British society on a more regular basis. In the 1980s, I started coming here regularly with the West Indies and played for Derbyshire. I was living here. I would be on a corner with friends hailing a taxi and the taxi driver would turn off his light and turn it back on when he passed us. You say, ‘is this what people live with?’ I then understood why people wanted West Indies to win every time they played, because it made them feel as if they had worth.”

Holding has been critical of England not taking the knee as soon as the series against West Indies ended. He calls them pathetic virtue signallers in the book. “They sent a bad signal. Because it was a black team, you take a knee? When the white people come, you don’t take a knee because it does not affect you? That is totally the wrong attitude to take.

“Maybe they thought we have ticked that box so we can move on. I’m not trying to force anybody to do anything, because either you agree with the cause or you don’t. If you don’t, then don’t try to pull wool over people’s eyes.”

He defends taking the knee against accusations of supporting the politics of the Black Lives Matter movement and believes statues of slave traders should be removed.

“Take the statues down, put them in a museum, but you cannot celebrate them. If you can’t understand that, then I can’t help you.”

“People are looking for an excuse. When you attack something you are looking for a weak spot, and those who don’t want to accept that black lives matter will look for whatever they can pull at to bring down that movement.

“I don’t think you can continue to celebrate people who were involved in slavery. I have never seen a statue of Hitler. He was an evil man, so you don’t celebrate evil. Anybody who thinks slavery was not evil then, sorry, you have a problem. Take the statues down, put them in a museum where people can study and learn about them, but you cannot celebrate them. If you can’t understand that, then I can’t help you.”

Education is the theme of the second half of the book, about why he feels it is important to change the way history is taught, even in the Caribbean where curriculums still teach the same version of events he learnt at school in the 1960s. “Lots of people go through life being told things and absorb them, and it becomes truth to them. Even me, growing up as a young man, I was taught things that I later realised were lies. You are told things to suit a certain narrative. Unless you go looking for the truth, and read other things, you go through life believing what you are told. 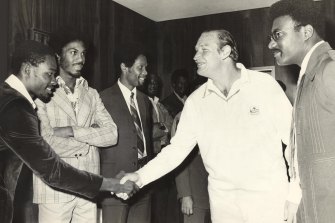 Kerry Packer meets the West Indies cricket team, among them Clive Lloyd to his left and opposite him with his arms folded, Michael Holding, as World Series Cricket gets going in 1977.Credit:Alan Gilbert

“We grow up believing Christopher Columbus discovered places, but how can he discover places when people are already living there? What he did was make Europeans aware of it. Because of the European arrogance, it does not exist until they are aware of it.

“I am trying to educate people about the real history. People like role models. That is why so many black achievers have been airbrushed out of history because it does not suit the narrative. Those have a false impression that the white race is superior. ‘Oh, I did not realise a black guy invented this or that’. A black person knowing we produced great people in the past will lift them.

“I need white people to understand what white privilege means. It does not mean things are given to you and you don’t have to work. White privilege means that whatever obstacles you come across, it is not because of the colour of your skin. Black people hit obstacles before they open their mouth, before people recognise what they are capable of because of the colour of skin. White people don’t have that.”

He knows he will face flak, but you cannot bowl fast and aggressively like Holding did so majestically for so long without a strong character.

“There are a lot of haters. I don’t care. Let them come. I will debate anyone on the subject. There will be some who don’t want to know, and I can’t help them, but hopefully enough will read it, think about it and understand, and say yes things have to change.”