Racing’s first lady Gai Waterhouse has a pep in her step, and in her voice, as she promotes yet another Melbourne Cup Carnival in the mounting yard at “fabulous Flemington”, on the eve of the sport’s most coveted race.

COVID-19 meant the charismatic figure couldn’t be on course in 2020, and instead was forced to watch from home – as she did when her two-year-old Farnan won last year’s Golden Slipper. 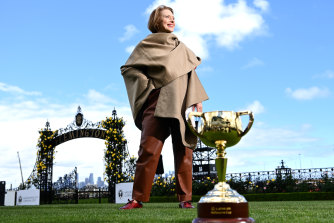 But with Victoria last week opening its border to NSW, Waterhouse is back in Melbourne preparing for another tilt at the Cup, a race she won in 2013 with Fiorente.

While racing has prevailed through the pandemic, it has lacked the atmosphere that tens of thousands of racegoers bring through the gates each race day.

But Waterhouse says it’s time for racing to play its part in getting Victorians and Australians back to normality.

“Sensational, in fact, absolutely fabulous,” Waterhouse, a long-time VRC ambassador, said when asked about having crowds back on course for Cup day.

“You just know the place is going to rock and roll. People just want to get out, they want to be able to live their life and get on with things.

There are few figures – few promoters – in racing like Waterhouse. It’s been five years since she formed a training partnership with young horseman Adrian Bott, and in that time the pair have continued to grow their formidable stable.

But Waterhouse says it’s still tough for young women to break through in racing. Speaking recently on Ahn’s Brush With Fame, she described her trailblazing efforts as an uphill battle. 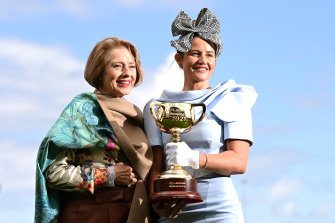 Jockeys such as Jamie Kah have blazed a trail of their own in the riding ranks, but even so, Sydney hoop Rachel King will be the only female rider in the field of 24 in Tuesday’s Melbourne Cup.

“It’s a hard and tough business, don’t kid yourself,” Waterhouse told The Age.

Yet carrying the title of racing’s first lady is something Waterhouse takes “very seriously”.

“I love mentoring young people, be it male or female,” said Waterhouse, who learnt a lot of what she knows as a young horsewoman herself from her champion father, TJ Smith. 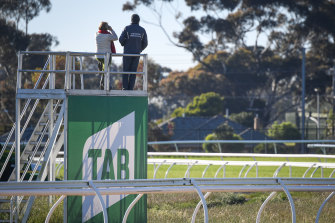 Gai Waterhouse has been keeping an eye on her Cup import Sir Lucan most mornings at Werribee.Credit:Getty Images

“I love them to do well. I surround myself with young people. Everyone in our business, Gai Waterhouse and Adrian Bott Racing, they’re all under 40, they’re all late 20s or early 30s.

“I find they keep me young, and I love it. I love the vitality young people have.”

Those who know Waterhouse describe her as a hard taskmaster, but one who instills trust in both her staff and her horses, as well as an ambition to be the best.

Sydney jockey Tim Clark said Waterhouse has pushed many young racing participants, including himself, to be that little bit better all the time.

“You’d be able to name a pretty long list who have worked under her and gone onto great things in racing,” Clark said.

“It’s probably a privilege to be in a position I’m in, riding a lot for Gai and Adrian. It’s not something I take lightly.

“She’s got a great work ethic herself, she doesn’t leave any stone unturned, and she’s got a great attention to detail, and she expects that from the people working around her.”

That critical eye is key to Waterhouse’s success. In one story Waterhouse shared to her stable website, she retold a time when she saw that attention to detail from her co-trainer Bott. 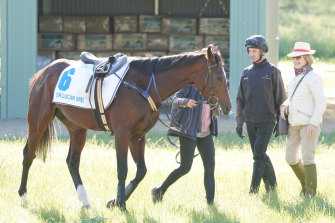 “The other day, I saw a piece of paper in front of the stables and I waited and he swooped in to pick it up,” Waterhouse laughed.

“I said, ‘Well-trained’. I said, ‘The attention to detail will make you a great trainer.’”

But Waterhouse’s individuality is also one of the reasons why she captures the imagination of so many.

Waterhouse has spent nearly every morning since arriving in Melbourne at the Werribee quarantine facility, where one of her Melbourne Cup contenders, Sir Lucan is based, having arrived from Europe last month.

It was the morning after the Cox Plate when Waterhouse – who also trains Cup contender Knights Order – bumped into Joseph O’Brien’s travelling foreman Mark Power, who had pulled up a bit dusty following a night of celebrations for State Of Rest’s Cox Plate win.

“I was definitely a little worse for wear and Gai came in to see her horse work, Sir Lucan,” Power recalled.

“I was out on the track before her and as soon as I was on the track, she made it her business to come over and congratulate me. I said, ‘Thanks very much,’ and she said, ‘How are you feeling?’

“I said, ‘I’m absolutely dying’, and she offered me a couple of Nurofen from her handbag and said, ‘The best way to get over the hangover is to drink plenty of water, take in your electrolytes and make sure your pillow is on a 45-degree angle, and don’t be lying on the flat of your back or else the blood will rush to your head.’ 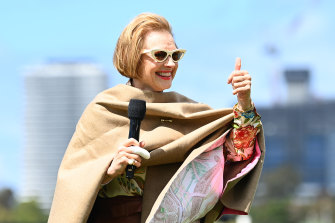 One of racing’s greatest ambassadors is Gai Waterhouse.Credit:Getty Images

“I said, ‘Gai, you’re speaking like a woman who has had plenty of experience,’ and she said, ‘I have indeed.’”

Clark said it’s normal for Waterhouse to be imparting “little bits of wisdom” to those young people learning the ropes, regardless of how unique the advice may be.

“In saying that too, even away from racing, she’s very knowledgeable in any aspect of life, she’s got a wealth of knowledge, and she can give you a bit of guidance on anything you need really,” Clark said.

“I guess she’d have a lot of people looking for little bits of wisdom from her and [is] happy to pass it on.”

Henry Field, managing director of Newgate Farm, worked under Waterhouse from the age of 14 and nine months and now races horses with her stable. He said Waterhouse’s ability to try different things to get the best out of her horses makes her great.

“She’s extraordinarily open-minded about how she trains her horses,” he said.

“That’s why she’s truly one of the best trainers on the planet.”

But Field said he most admires how she has juggled work and family life; a balance Waterhouse said has improved since teaming up with Bott.

“Her son, Tom is one of my best friends, has been for most of my life, and I’ve seen Gai on both sides of the fence,” Field said.

“But one of Gai’s greatest assets is that she is truly one of the best mothers I’ve come across. She raised two kids, I think, two of the most well-mannered and polite kids I knew in Sydney growing up, and I think it’s a huge feather in her cap, to have worked the extraordinary hours she did through that period of her life and still be there for her kids.”

How much longer can Warner stay silent about Sandpaper-gate?