Jockey Robbie Power hopes Lostintranslation and The Big Breakaway — two horses which played a big part in his decision to relocate from Ireland to England because of travel restrictions due to Covid-19 — will reward that decision at Kempton on Boxing Day.

Power’s family remains in Ireland and the sacrifices he is making to ride for Colin Tizzard’s Dorset stable will be even more keenly felt at Christmas.

But Power is hoping 2020 Cheltenham Gold Cup third Lostintranslation can bounce back in the King George VI Chase from a disappointing comeback in last month’s Betfair Chase at Haydock. 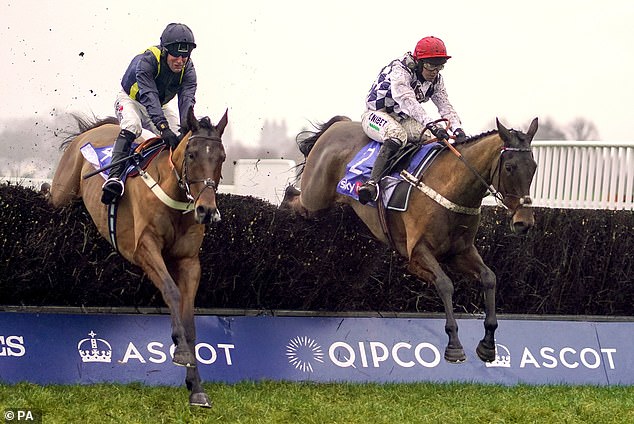 And he is sure The Big Breakaway will appreciate a return to three miles in the Kauto Star Novices’ Chase after being beaten when dropped back to 2m 3f at Exeter on his last run.

Power said: ‘I had options to weigh up in October but Lostintranslation and The Big Breakaway were two of the reasons for me deciding to come and ride in England. They are both running at Kempton so it makes sense for me to be there.

‘It is very hard to be overly confident with a horse who is coming into the race off the back of a bad run but Lostintranslation went into the Gold Cup last season off the back of a disappointing run in the King George and ran a cracker.

‘A lot of people were disappointed with The Big Breakaway’s run in Exeter but I wasn’t. The plan was to drop back to two-and-a-half miles to sharpen him up but it was a small field with no pace.’

With Gloucester moving to Tier 3 protocols on Saturday, Cheltenham’s New Year’s Day meeting will be behind closed doors.