Victoria’s premier jockey Jamie Kah took just two races at Caulfield on Saturday to notch her 100th city win for the season, breaking a record set by Brett Prebble more than 20 years ago.

Partnering with fellow South Australians Tony and Calvin McEvoy, Kah took Deep Speed straight to the lead over the sprint trip and held off the challengers to the cheers of a swollen Caulfield crowd. 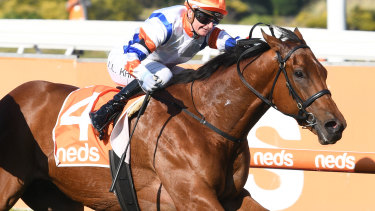 A modest Kah gave an understated wave to the crowd with her whip in-hand as she was applauded back to the winners’ stall and she said she was relieved to have finally hit the ton, having gone through last Wednesday at Sandown stuck on 99.

“It’s been a very, very long week. I’ve had some really good people around me getting me through it. It’s a big relief today and to do it for Tony and Calvin,” Kah said, after her ride in race one finished fourth. 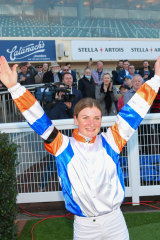 “I’m not the one for crowds and people cheering my name, it’s very foreign to me still.

“Wednesday was unbelievable to see that many people at Sandown. Today…everyone and all the kids with signs, it’s very special.”

The race came down to the last 50 metres, with Kah willing her horse to hold on to the lead, and it did. Race caller Matt Hill described the achievement as “a century of winners from the Kah of the year”.

“I was hearing the crowd and getting goosebumps over the line,” Kah said, adding she told her family not to come to Caulfield so as to not jinx her.

Melbourne Racing Club played a montage of her best wins this season on the big screen following the race.

The achievement is Melbourne racing’s version of 100 goals in an AFL season, only it’s never been done before until now.

Prebble’s record of 99.5 wins in 1999-2000 – really 100 victories, however a dead-heat in that season counted as just half a win for the record books – stood for more than 20 years, before Kah took the Melbourne ranks by storm.

Her season includes wins in the group 1 Lightning Stakes on Nature Strip, which she listed as arguably her biggest win this season, and the group 1 Toorak Handicap on Mr Quickie.

Group 1 wins interstate aboard Cascadian and Vega One were additional to the 100 city wins in Melbourne this season.