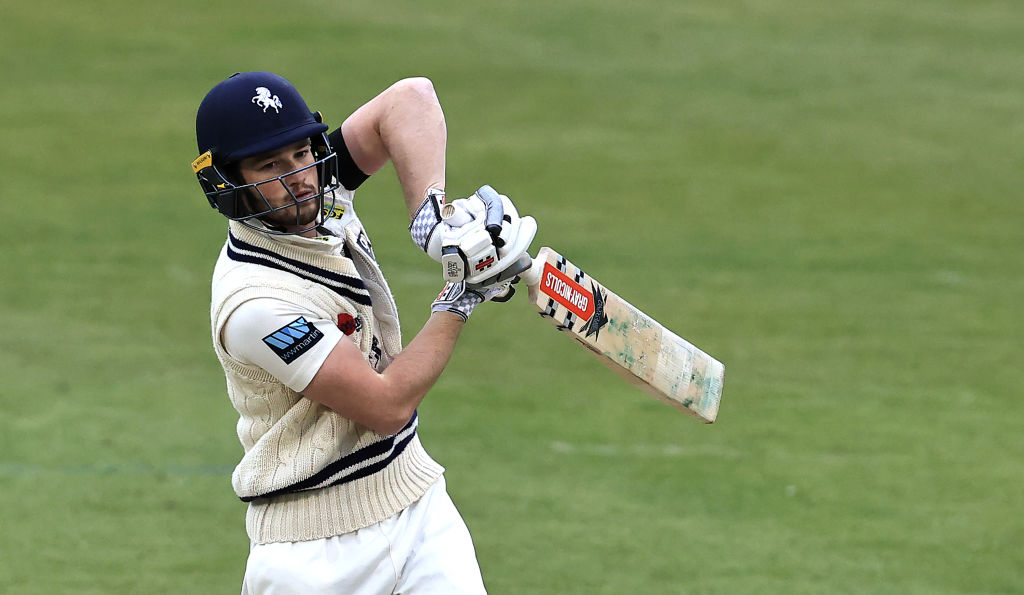 Less than a week ago, Kent wicketkeeper Ollie Robinson issued a clarification on social media after being mistaken for his namesake, the Sussex and England bowler who has been suspended from international cricket pending the outcome of an investigation into historical offensive tweets.

Three days later, he was making headlines of his own by scoring a classy century in Kent’s County Championship clash with Northamptonshire at Canterbury.

Having to deal with this particularly unfortunate case of mistaken identity seems less than ideal preparation ahead of a County Championship match, but Kent’s Robinson refused to let the situation affect him.

‘I’d like to think I’ve kind of made my own headlines this week,’ Robinson told Metro.co.uk. ‘It obviously wasn’t ideal getting dragged into something I wasn’t part of.’

It was only ever going to be a matter of time before Robinson made his third first-class century. The 22-year-old has looked in good nick all summer, scoring 84 in Kent’s opening fixture, 85 against Sussex last month and a handful of 40-odds.

It is not just this season in which he has impressed, either. Robinson has established himself as a key player for Kent since the 2019 summer, when he scored two tons and three fifties. His tally of 765 runs was bettered by only 11 players in Division One.

He doubts he has ever batted better than he did against Northants, however, with his 120 coming off just 119 balls and including 19 boundaries.

‘Those innings definitely stand out. You can get pretty forties and fifties but no-one really notices them and sometimes they don’t make a huge difference. But if you get 120, people start to notice so it was great to be able to do that this week.’

Robinson, who has opened for Kent in their last two matches (something he did regularly growing up), is comfortably the county’s leading run-scorer this summer.

While that highlights his consistency, it also speaks to Kent’s struggles this season. It has been a frustrating start to the summer for Matt Walker’s side, who are one of only two teams in the country yet to win a match in the County Championship, with five draws and three defeats from eight games. But really, the table only tells half the story.

‘We kind of had a chat about that in the changing room yesterday,’ Robinson added. ‘We know we started slowly and didn’t get off to a great start.

‘But in the last three or four weeks, we’ve put ourselves in positions to win games only to be beaten by the weather. We’ve not really had the rub of the green, but obviously in some games we haven’t been good enough.’

Someone who has been good enough, is Darren Stevens. The 45-year-old has taken 26 wickets at a little under 20, while his stunning 190 against Glamorgan was hailed as one of the great County Championship knocks.

So are Stevens’ teammates at Canterbury even surprised by his continued excellence?

‘He does it so often that I think we’ve all stopped being surprised now,’ Robinson said with a grin. ‘It’s not really a shock anymore, it’s just Stevo doing Stevo things.

‘He is a different breed though. Who knows, he could even still be playing at 50. That innings (his 190 from 149 balls against Glamorgan) was unbelievable to watch. He was so smart with the way he went about it as well. He’s an unbelievable striker of a cricket ball.’

Stevens is one of a number of players at Kent who Robinson is keen to learn from. He recently pulled the veteran to one side and asked: ‘If you were bowling to me, how would you try to get me out?’ He believes getting inside the mind of bowlers will help him improve.

Being able to see how Kent teammate and England batsman Zak Crawley goes about his business should also help.

Crawley was beginning to find some impressive form for Kent before re-joining England’s Test squad and, while he failed twice in the draw with New Zealand at Lord’s, Robinson expects him to come good this summer.

‘His talent is not something you can question – he’s such a talented player,’ Robinson said. ‘Zak works so hard on his game as well, he probably hits more balls than anyone in the team.

‘He always wants to improve which is a real credit to him given the position he’s already in. He was batting beautifully for us before going away with England. I don’t think anyone can question Zak’s talent or ability.’