Cheered on by upwards of 50 family members, South Africa-born Labuschagne scored a run-a-ball 108 as Australia posted 7-254 in Potchefstroom. 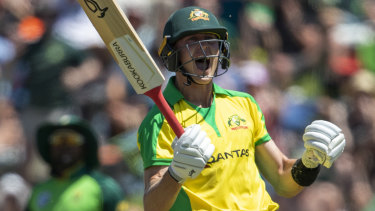 Labuschagne's emotional century at least provided a feel-good moment for Australia, who face a tight turnaround to a home ODI series against New Zealand and T20 fixtures across the Tasman.

Labuschagne grew up in Klerksdorp, some 40 minutes away from Potchefstroom, and didn't move to Australia until just before his 10th birthday.

Relatives from his mother's side of the family had driven five hours to see him make a golden duck in the previous match in Bloemfontein. 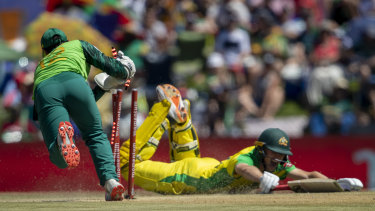 South Africa captain Quinton de Kock removes the bails to attempt a run out of Labuschagne.Credit:AP

But it was a different story in Potchefstroom for the Labuschagne clan, who rose to their feet in jubilation along with plenty of Proteas supporters when he reached triple figures.

"I think I carried on like a bit of a goose but it was amazing," Labuschagne said.

"To have 50 of my family members up there from all around South Africa, it was just really special.

"It was nice to hear the cheering and excitement when you do reach those milestones. You never know how it's going to end up, whether the crowd will love you or hate you. 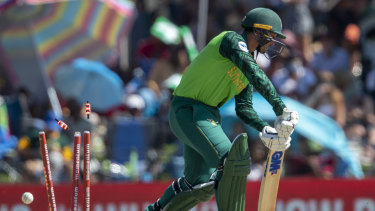 Australia struggled to get going in their innings, managing just 39 in the first 10 overs for the loss of David Warner (4), and were three down for the addition of another 16 runs as South Africa picked up the key wickets of Steve Smith (20) and Aaron Finch (22).

Finch was a debut wicket for South African seamer Daryn Dupavillon (1-21), who was in the team after the home side rested the spearhead of their attack, Lungi Ngidi.

Labuschagne set about rebuilding the innings, though, as he put on 81 for the fourth wicket with D’Arcy Short (36) and 53 for the fifth with Mitchell Marsh (32).

He reached his maiden ODI century off exactly 100 balls 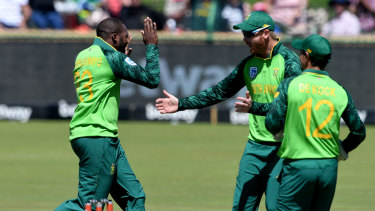 Jhye Richardson, summoned for his first game of the tour, chipped in with 24 not out in a 64-run seventh-wicket partnership.

"Obviously [254] was probably not enough on that wicket," Labuschagne said.

"It's nice to score a hundred but to lose a game is still very disappointing."

Finch's men won't depart empty-handed, having tuned up for hosting the T20 World Cup later this year by winning the preceding 20-over series.

"We have not been at our best, we have been good in patches and then let our foot off the gas," Finch said at the post-match presentation.

"Credit to South Africa, they put us under pressure with bat and ball. We only took 12 wickets in the series, but all round we have not been at our best."

But while the next 50-over World Cup isn't until 2023, Australia have a lot of work to do in the format after being swept by a depleted Proteas outfit missing Faf du Plessis, Kagiso Rabada, Rassie van der Dussen and Temba Bavuma.