Justin Langer has challenged the contention of disaffected broadcasters in their bitter stand-off with Cricket Australia, believing the quality of the Big Bash League "probably won’t be much different" than previous summers.

CA’s interim chief executive Nick Hockley will meet with Foxtel CEO Patrick Delaney on Thursday and Seven West Media boss James Warburton on Friday in a bid to settle escalating tension with the game's television partners that is threatening to end up in court. 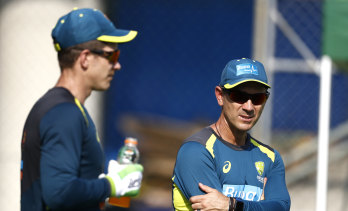 The looming absence of more Australian internationals than usual from the Big Bash League is at the heart of their discontent, and both have disputed CA’s issuing of force majeure notices on the upcoming season.

Warburton has been particularly scathing of the governing body and it wasn’t difficult to interpret his lavish praise for the AFL on Wednesday, as the football code announced the Gabba as its grand final venue, as another backhander for cricket.

“The grand final at the Gabba is the culmination of an incredible season of collaboration with the AFL,” Warburton said.

“Together we’ve been able to deliver a top-quality broadcast schedule in a season like no other, and it’s a testament to the strength of our partnership that the fans have continued to see great footy throughout.”

Langer, the Australia coach and selector, said on Wednesday the squad sizes for Australian teams had not been finalised but he envisaged they would be "a little bigger" than usual because of biosecurity demands. He maintained, though, he wanted his best players in the BBL as often as possible.

“The reality, though, in this once-in-100-year pandemic … there has to be some little changes because with the borders as we currently see it, you can’t just bring people in and out. Usually we have 14 players [in Test squads] and we let a few guys go. But with the restrictions that’s not going to be as easy."

A multiple BBL title-winning coach with Perth Scorchers, Langer hopes some "honest conversations" with broadcasters can defuse the drama but does not believe the Twenty20 league will be greatly affected by the international bubbles.

“Often the best international players don’t play because they’re playing for Australia so it probably won’t be much different this year than it’s been," he said.

Seven tried to sell its share of the BBL to Network Ten this year to reduce debt and it remains eager to cut it loose. 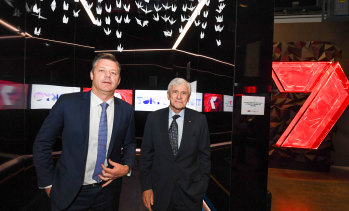 The network is angry that key recommendations from a report filed in March by Ten’s former executive producer of cricket, David Barham, were overlooked. The report, commissioned by CA, determined among other findings that all Australian players needed to be made available for the BBL after the Sydney Test and that urgent attention was needed in order for its value with broadcasters not to fall through the floor.

Seven argues CA is contractually obliged to deliver a competition of no less quality than last season and has grounds terminate its $450m deal. Sources in cricket counter this by saying the clause in the contract states that CA must “use all reasonable endeavours” to ensure such a standard is met and the millions being spent on biosecurity arrangements is a reflection that they are doing so.

CA is also claiming it will produce a top-quality event and is trying to balance out the absence of players due to larger Australian squads by helping BBL teams recruit and pay for big-name overseas stars outside the salary cap.

Its plans received a boost after it emerged the Australian Cricketers’ Association was giving in-principle support to the addition of a third international on each team’s roster in the extraordinary circumstances of this summer. The caveat is that the ACA does not want the cash coming out of the pockets of local players, but CA is expected to use a separate pool of money for its marquee recruiting effort.

“Hopefully they then get on the same page and work together and make sure we get the best result for cricket in this country, not just for Channel Seven, not just for Cricket Australia,” he said.

“They need to work together and do what’s best for the game. Hopefully they … iron a few things out and we can all move forward.”

CA will announce its domestic schedule in coming days ahead of an amended international calendar next week. The BBL will be played in a travelling hub, the Sheffield Shield is expected to start next month with four rounds in a bubble in Adelaide and the Women’s Big Bash League will be played in its entirety in Sydney.