Steve Smith and David Warner's return to Australia's national T20 fold is providing more than just runs, with captain-in-waiting Alex Carey among the players benefiting from an embarrassment of riches on the leadership front. 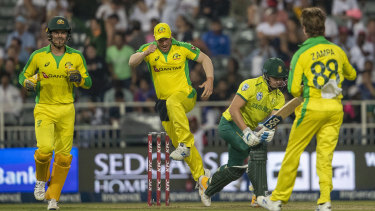 "His tactical mind is getting better every time he plays for Australia."

Australia's road to hosting the T20 World Cup in October also includes tours of New Zealand next month and England in July.

One question that remains unresolved is who will fill the middle-order batting positions, with Matthew Wade and Mitch Marsh recalled to bat at No.4 and No.5 respectively and Glenn Maxwell to return from injury later in the year.

Carey, who combined with Marsh for a 50-run partnership at the Wanderers, recently batted up the order for the Adelaide Strikers in the BBL but is keen to seize his opportunity at No.6.

He said the side's performance on the road in a year dominated by white-ball cricket would reveal how far they'd come.

"We've got enough opportunities moving forward to see where we're really at," he said.

"But at the moment, what we're doing off the field is really helping in the middle."

Khawaja stakes Ashes claim with a century of substance