Australia has laughed in the face of New Zealand’s assessment ahead of the two sides’ do-or-die T20 World Cup clash this afternoon.

Perry in doubt for Kiwi clash 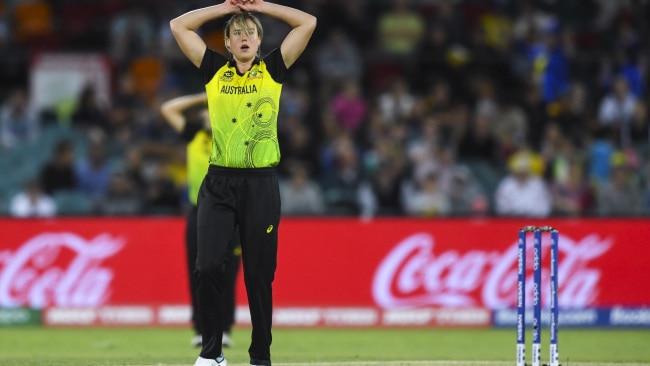 The winner will qualify for the semi-finals while for the loser, their tournament will be over.

New Zealand won the toss and elected to field first.

Australia has laughed off suggestions from New Zealand all the pressure is on the home team in their do-or-die T20 World Cup clash in Melbourne.

The Aussies were favourites to win the title but a first-up defeat to India meant their campaign got off to a rocky start. A loss to the Kiwis would end the hosts’ tournament before they even reached the semi-finals, while a win will see them advance to the final four.

The same applies to New Zealand but ahead of today’s blockbuster, White Ferns star Katey Martin was keen to heap all the expectation on Australia.

“It's effectively a quarter-final for us and, you know, we've got nothing to lose," she said. "All the pressure is on Australia, it's their home World Cup."

But Aussie all-rounder Ash Gardner wasn’t buying it, writing in a column for News Corp: “I actually laughed when I saw her comments. There’s a lot of pressure on NZ, too. They haven’t been very successful in the past of getting through the group stages in World Cups.

“We’ll just let our cricket to do the talking for us.”

"I would say it would be a really good deflection from them considering they haven't progressed through the round stages the last couple (of ICC tournaments).

"Without shooting too many bullets that's as far as I'll take it. There is a lot of pressure on them. In my mind, I thought this was a really good side for them to win this World Cup. It's a shame it's come down to us two to make the semi-finals."

Australia is off to a good start but a positive mindset has cost the first wicket of Alyssa Healy.

Healy was looking to score from ball one but a lofted drive that didn't come out of the middle was her downfall as she chipped the ball to mid on for an easy catch.

But at 1/20 off three overs, Australia have shown they're looking to pile on the runs.

Ellyse Perry has proved her fitness and will take her place in Australia's XI.

The gun all-rounder injured her hip while fielding in a win over Bangladesh and there was a fear she may be forced to withdraw from the game against New Zealand.

She didn't train with her teammates on Sunday but hit some throw downs in a one-on-one session in the indoor nets at Junction Oval.

Thankfully for Aussie fans, Perry was seen marking her run-up on the ground shortly before the toss and it was later confirmed she had been given the all-clear to take part in the must-win match.