Melbourne Cricket Club chief Stuart Fox insists he is "increasingly optimistic" the Boxing Day Test will go ahead in Melbourne.

Cricket Australia has yet to publicly release its revamped men's domestic and international fixture for 2020-21, with the highlight of the summer a four-Test blockbuster series against India.

Under the new scenario, Melbourne is set to host the second Test, with the series to begin either in Adelaide or Brisbane. However, the Melbourne Test will only go ahead if the state's strong COVID-19 restrictions are lifted in order to allow a crowd of more than 25,000. 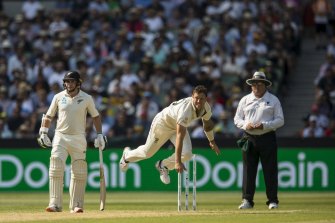 James Pattinson bowls on day two of the 2019 Boxing Day Test at the MCG. Credit:Chris Hopkins

Fox, who is in ongoing discussions with CA and the state government, said on Tuesday he was "increasingly optimistic" the MCG will retain its now traditional hold on the marquee event through a "COVID-safe plan".

"If you can have 25 to 30 per cent [of capacity] in, they are pretty good numbers for the 'G'. Given the scale of the building, you can socially distance responsibly in a huge complex like this," he said.

"The scenario is very obvious – it's very similar to the AFL grand final … that said, if we can stay on track, on course, to where we are heading at the moment, it's everyone's intention to play this match at the MCG."

Premier Daniel Andrews has also given hope the state will retain the blue-chip event that is a key plank of Victoria's sporting economy.

If Melbourne cannot stage the match, state associations believe the Adelaide Oval could host back-to-back Tests, before the third Test is held in Sydney and the final clash in Brisbane. If Brisbane hosts the first Test, then Adelaide is likely to stage the preceding white-ball series against India.

Another scenario has back-to-back Tests in Sydney.

"It's everyone's intention to play this match at the MCG. We're putting everything in place to make it happen. We are realistic about the prospects moving forward," Fox said.

Broadcasters Seven West Media and Foxtel continue to await a final fixture. Foxtel chief Patrick Delany and CA chief Nick Hockley met over breakfast in Sydney on Tuesday, with discussions about the summer ahead said to have been "positive".

Foxtel has not publicly attacked CA, unlike Seven which has made its displeasure with the governing body clear, even threatening to tear up its contract over concerns about the standard of the Big Bash League.

Another nod for Cummins, three bolters named for England tour