Bart Cummings was right, champions should be celebrated and not compared. Winx beat Kingston Town’s Cox Plate record, but who would you have at their pomp? Black Caviar never lost, but she never faced Manikato either. So You Think and Tulloch? How the hell can anyone possibly know.

An uncomplicated New Zealand mare with oversized ears doesn’t immediately spring to mind when discussing the greats of the Australasian turf, but don’t mistake Melody Belle for just another horse. 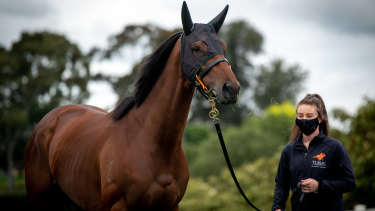 Right now, she’s just ranged up alongside The King and is about to challenge Black Caviar when it comes to group 1 wins. The greatest Kiwi mare of them all, Sunline, has just been cast into the rear view mirror. The comparisons sound absurd for a horse that has only ever won two races in Australia, but does that mean she deserves any less recognition?

“I do feel uneasy because as soon as you start making comparisons people start saying, ‘yeah, your horse isn’t as good as Sunline and Black Caviar’,” says John Galvin, who manages Melody Belle’s Fortuna syndicate. “I’m on record as saying Sunline was my favourite race mare of all time.

“We know Melody Belle’s record is mainly in New Zealand. The comparison is not completely fair, but having said that she has achieved 14 group 1 wins. I think we should just stand back and admire all of these champion horses and put their various records in perspective.”

On Saturday, everyone will stand back and see if Jamie Richards’ mare can join Black Caviar as a 15-time group 1 winner. But that’s really where the similarities start and end.

Black Caviar was always a patch-up job. Racecaller Greg Miles once described her as “brutal power wrapped in an elegant machine”. But she was a machine which needed constant maintenance, the Cadillac which returned to the mechanic just as quickly as it left after one Sunday spin down the highway.

After she stopped almost dead in her tracks when Luke Nolen throttled her down for her most famous win at Royal Ascot, Black Caviar was then attacked by a swarm of bees a few days later. Moody, in a way only he can, later reflected on the toll years of racing had taken on her for that Ascot adventure. “She was just dead set rooted,” he said.

With Winx, Chris Waller craved longevity. She ended up with 25 group 1 wins. Unlike Black Caviar and her enormous stride, Winx had a shorter, but furious gait, where her stride rate left her rivals giddy. When urged for a supreme effort, her lean and athletic frame would pick up the cadence again. Other horses were shortening and slowing stride, and she would just keep the same furious tempo – or increase it if required. On wet tracks, especially, it was a phenomenal sight.

With Melody Belle, there’s little of that. She’s businesslike. The winning margins are often narrow. Wet or dry, it doesn’t usually matter. She’s always had a strong following in New Zealand, more out of respect for her record rather than razzmatazz on the track. 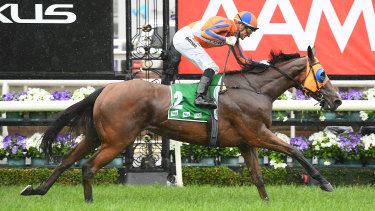 But they can’t see where it really matters with Melody Belle.

“The one thing you can’t tell when you buy a horse is how big the heart is,” says David Ellis, Te Akau principal and the man who bought Melody Belle. “She’s quite remarkable because all the vets in the southern hemisphere would go bankrupt if every horse was as sound as her. She literally never needs a vet to do anything.”

Her young trainer, Richards, reckons she ties up occasionally, so he’ll swim her maybe a little more than others. But apart from that, it’s hard to find fault with a horse so unremarkable she didn’t even make her NZ$60,000 reserve when sold as a yearling.

Even then she was an unspectacular type, a little backwards if anything. Ellis and Richards had gone to $57,500 and her vendor, Haunui Farm, said it would do. As they do with all their prospective buys, Ellis and Richards had done their homework. They like to buy the first foals from a mare, and they knew Melody Belle’s dam, Meleka Belle, could gallop, but was never able to prove it on the track as she battled niggling problems.

“I remember when we first found Avantage I just wrote ‘KM’ [Karaka Million on her catalogue page] and she went on to win that,” Richards says. “But I don’t remember what we said about Melody Belle. Perhaps she was a little backward, but she had these great big ears.

“A lot of people ask [about the ears], it’s a bit of an old wives tale. All the old school boys say they used to love the fillies with big ears. I never forgot that growing up hearing those guys say that. They were good, well respected judges.”

More than a few judges have had their say on Melody Belle since.

Not fit to be Sunline’s travelling companion? Kingston Town, please. How can you even mention her in the same breath as Black Caviar? That all might have a semblance of truth to it, but there has never been a horse that has dominated New Zealand racing for as long, and none before had won the country’s triple crown.

“People can say what they like about New Zealand racing, but the fact of the matter is she’s still done it and beaten everything here there is to offer,” Richards says.

“When people are comparing her to Sunline – who in our opinion was the mare of the world and won in Hong Kong, won Cox Plates – Melody Belle hasn’t done that. But she’s still performed at the highest level and done a wonderful job for us and her ownership group and everyone involved. She’s still a fantastic mare.”

Yet there is still one more record to be corrected.

Melody Belle has never won a race in Sydney in six attempts (she has won an Australian group 1 in the Empire Rose Stakes at Flemington in 2019 and finished fourth in last year’s Doncaster). She is poised to start favourite in the Tancred Stakes at Rosehill on Saturday, the first time she has tried 2400 metres in her career.

Richards and stable staff put her on a plane on Monday night, unsure if they’ll be there in person to watch her race again during the Queensland winter carnival given the Australia-New Zealand travel bubble is no closer to starting. There were a few tears as she walked out of the yard for the last time, this time through sadness – rather than laughter in the early days.

“We have 37 individual people with shares in her and they’re all over New Zealand, on both the north island and south island,” Galvin says.

“There’s only one from Australia and when he first took the share in Melody Belle, all his mates down at the cricket club who like to have a bet said, ‘you bloody mug, why did you take a share in a Kiwi horse?’

“Well, the last laugh is with him.”