As the last Australian wicket fell in the second innings with a lead of 328 for India, there were emotional scenes from the visitors.

In a series that will long go down in memory with just one day left in the two month-long tour, there were stories galore coming out of the Indian camp that continued to build on the rivalry between Australian and India.

The unexpected arrival of Mohammed Siraj from net bowler at the start of the series to the leader of the Indian attack has been the nothing short of phenomenal.

As Josh Hazlewood cut Siraj down to Shardul Thakur down on the boundary to nab the last wicket, there were few more deserving of a five-wicket haul than Siraj.

He embraced with Mayank Agarwal straight after the wicket as the pair pointed to the heavens.

It comes after Siraj’s dad died on Friday November 20 and the 26-year-old decided to stay on despite the BCCI reportedly telling him they would fly him home if he chose.

The performance meant a lot to his teammates as well with his teammates all coming in for a hug, while he shared a warm embrace with Indian pace spearhead Jasprit Bumrah on the sideline.

Cricket writer Bharat Sundaresan shared what India’s head coaches told Siraj when he went to practice after his father’s death.

“You’ll end up with a five-wicket haul in this Test series. Your father’s dua (blessing) is with you.” At the New Years Test in Sydney that Siraj was seen wiping away tears during the national anthem.

“I remembered my dad during the national anthem, it was very emotional. My dad always wanted me to play Test cricket. If he were here today, he would have seen me playing for India,” Siraj said after the first day’s play at the SCG.

“It was my father’s dream that Siraj should represent India in Tests,” his brother Mohammed Ismail told PTI last month. “He always wanted to see him in blue and white jersey to represent the nation, so our dream got fulfilled today.”

Siraj’s tragic loss has been a driving force for India’s newest fast bowling star, as he took the a five-for in the last bowling innings of the series.

Indian legend Sunil Gavaskar, who was commentating on Channel 7’s cricket coverage, said Siraj exemplified what India had been through, from an insane injury toll, to the abuse scandal in Sydney, to just being overseas for two months in the middle of a global pandemic.

“It doesn’t matter what happens here at the Gabba … we Indians can and will truly be proud of our cricketers,” Gavaskar said.

“I’ve led Indian teams on tours of Australia and know first hand just how challenging it can be. But what we have witnessed in this series is something extraordinary. The resolve, fortitude and reserves of spirit displayed by these players has been inspiring.

“Most have been away from home and in quarantine for over five months. They have seen friends battered and broken, they have been tested to their cricketing and mental limits at every turn, every minute. And even under that most intense strain, they have never stopped fighting and they may still somehow even manage to take the trophy home.” 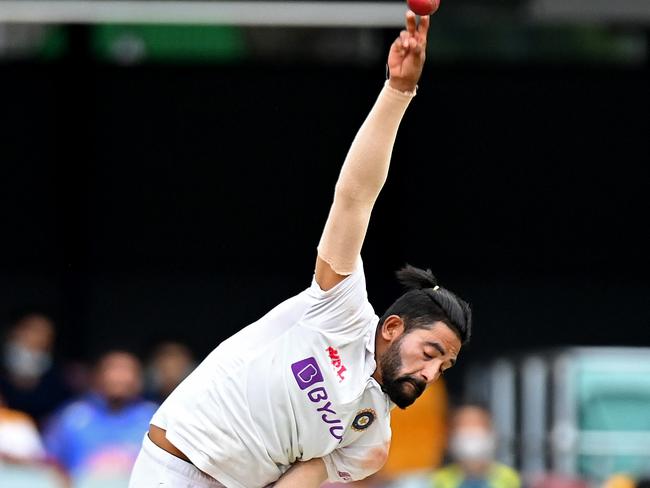 Who would have thought Siraj would play so much of an impact this tour?Source:Getty Images

Gavaskar wasn’t the only one as social media erupted over for the 26-year-old’s incredible performance.

And let’s not forget he started the tour and dealt with great personal loss. Test of character for Siraj #AUSvsIND

No matter who you’re supporting you have to feel happy for Mohammed Siraj. Most deserved 5-fa in some time. #AUSvIND

Sport is all about stories. Mohammed Siraj is one. His proud father is smiling on him from heaven seeing his son show that ball to the world. A fiver that has answered all the insults the best.

Have to be an idiot (or worse, one of those sludge guts throwing verbal sewage from behind the fence) to not be happy for this bloke. https://t.co/S7A3ru5fD4

He really bowled his heart out. You could see the intensity. #Siraj

Two men chasing a five-for. Shardul takes a catch (off Siraj's bowling), and then celebrates so selflessly. Then Siraj walks past the ropes to be affectionately hugged by Bumrah. These are the greatest life lessons in team spirit. What are these men made of? #INDvsAUS

Take a bow Siraj. This is not just the spark signalling a great individual career but his heart plus ability is a large part of why Team India have been so resilient and competitive #AUSvsIND

Newsboy’s racing tips for Ayr and Southwell on Sunday