Luke Currie expects to be sidelined for "months, not weeks" after having surgery on Sunday morning.

The group 1-winning jockey suffered two fractured ribs and a fracture to his C7 vertebra in a fall following the last race at Moonee Valley on Friday night, which ruled him out of the plumb ride on Blue Diamond favourite Hanseatic on Saturday. 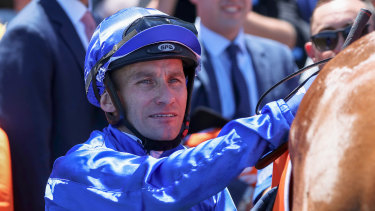 Currie underwent surgery at the Royal Melbourne Hospital on Sunday and told The Age that "all went well".

"They've taken bone from his hip and fused his C6 and C7 … and put a plate and screws in."

Currie said he was yet to have his post-operative rubdown but imagined he would be sidelined for "months, not weeks".

He was due to ride hot favourite Hanseatic for Anthony Freedman in Saturday's $1.5 million two-year-old classic, but was replaced by Tim Clark following his fall.

Currie is certain to miss the opportunity to ride Hey Doc in the $2 million Al Quoz Sprint at Meydan, Dubai, on March 28, and also faces a race against the clock to be fit to ride Sunlight at Royal Ascot in June.

Tony and Calvin McEvoy are expected to discuss a replacement rider for Hey Doc this week.

Stewards have opened an inquiry into Currie's Friday night fall from third-placed Yulong June past the finishing post at The Valley.

It's likely Currie will be called to give evidence at Racing Victoria's Flemington headquarters in the next week or two.

No other jockeys and no horses were injured in the incident.

Currie has had a terrific few seasons, riding seven group 1 winners since 2016 including last year's Blue Diamond victory on Lyre and the 2018 Coolmore Stud Stakes win on Sunlight.