Shane Warne’s family say the cricket great’s farewell at the MCG on Wednesday evening will be an “amazing celebration” of his life, and a special time for his loved ones.

Speaking to Eddie McGuire’s Jam TV ahead of the state memorial service at the ’G, the cricketer’s son Jackson Warne said, “we’ve been lucky enough to come here our whole life”.

“I think there’s no better place in the whole world for … people – Melburnians, Victorians, Australians and people from around the world that loved him as a cricketer [and] a mate – to come and say goodbye,” he said.

“For all of us to come and sit down at this ground for the rest of our lives and be able to say we’re sitting at Dad’s stand forever, it’s pretty special.”

Up to 65,000 people are expected to attend the memorial service. As of 5pm on Tuesday, 51,298 people had secured tickets.

Jackson said that while he was too young to remember watching his father play cricket, “he performed under pressure, and he loved a crowd; he actually played better when there was more people”. 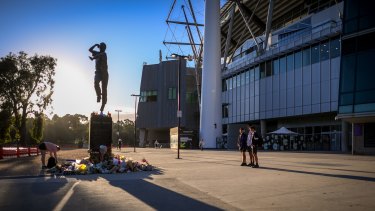 People leave tributes at a makeshift memorial at the Shane Warne statue at the MCG.Credit:Eddie Jim

“I don’t think we’ll get another Shane Warne and another dad like him.”

Jackson said it was a great honour to have the state memorial service at the MCG, where his father made many Melburnians and other Australians proud.

The cricket great’s father, Keith Warne, said his son would have wanted to make sure that everyone who could be involved in his send-off was involved.

“It will be an amazing celebration,” he said.“[We’re] very fortunate to have a state funeral to allow us to do that.

“There’s so many people who’ve come and offered their help in video tributes. It’s just going to be a massive night.

“I think a lot of people are going to get a lot of joy in being able to say goodbye the way they wanted to.”

The state memorial will feature pre-recorded songs by Elton John and Ed Sheeran, speeches by Warne’s children and panel discussions among former teammates and opponents.

Jason Warne said he was amazed at the outpouring of support following his brother’s death.

“Pretty much every channel you turn on to you’re seeing his exploits, whether it’s his 700th wicket or hat-trick or whatever at this ground,” he said.“In between the tears you’ve had some pretty fun memories to look at.”

Sir Donald Bradman’s granddaughter Greta Bradman, who will sing the national anthem at the service, said she was honoured to be part of the event. “I think about what Grandpa thought of Shane; I mean, he just absolutely had a massive soft spot for Shane Warne,” she said.

“Shane and [Indian cricketer] Sachin Tendulkar visited Grandpa on the occasion of his 90th birthday, and he was tickled pink,” she said.

“I think it wasn’t just what he could do with the ball; it was the man that he was, and he was so unashamedly himself and that really appealed to Grandpa.

The event will be broadcast live on all major Australian free-to-air networks as well as Fox Cricket, beginning at 7pm.

The event will end with the Great Southern Stand officially the renamed after Warne. Two senior cricket sources confirmed the chosen name would be the Shane Warne Stand. The Victorian government flagged the renaming plans soon after Warne’s death.

Why doesn’t the All-Star Mile live up to its name?