No decision will be made just yet over whether Enable has run for the final time in her exalted career, following her sixth-place finish in the Prix de l’Arc de Triomphe.

Gosden felt the slow pace dictated by Persian King also worked against his runners, with Stradivarius finishing right on Enable’s tail, and he put that down to the absence of Aidan O’Brien’s contenders, who were dramatically ruled out on Saturday evening due to problems related to contaminated feed.

“If we’d had Sovereign and Serpentine in there it would have been a very different race, but as it was it didn’t work out for her or Stradivarius,” said Gosden.

“Frankie (Dettori) said neither horse liked the holding ground, it would have been better if it was wetter. I did warn people, though.

“They didn’t have a hard race as it was only a little dash. They weren’t blowing, so it was a rather elaborate journey for a racecourse gallop up the Longchamp straight.” 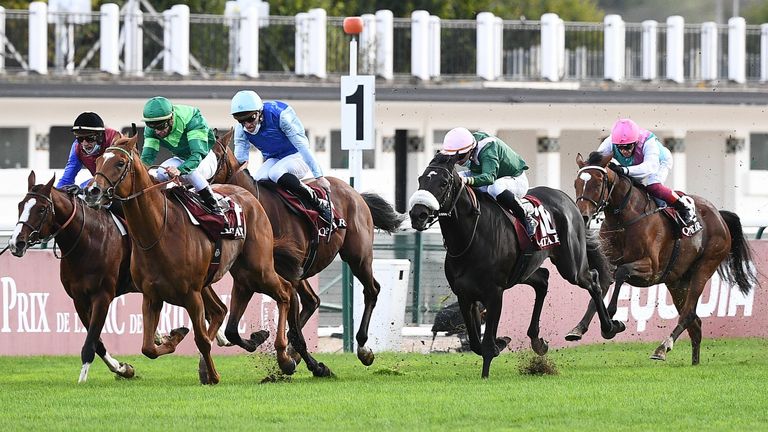 While Enable’s future remains up in the air, Gosden did confirm that triple Gold Cup winner Stradivarius will stay in training.

He told Sky Sports Racing: “I think Mr (Bjorn) Nielsen is keen for Stradivarius to attempt a fourth Gold Cup.

“With Enable Teddy (Grimthorpe, racing manager) and I will report to Prince Khalid (Abdullah, owner) and he will make the decision whether she has one more race or retires. It will be entirely his decision.

“We know she has a great turn of foot. It was unfortunate she was the meat in a sandwich at one point and once you break your stride in that ground it is difficult to get going again.

“To that extent Frankie never touched her with the stick, same with Olivier (Peslier on Stradivarius), the horses weren’t handling the ground so the jockeys looked after them.

“Both are extremely bright after the race which is extremely good news because you always worry in that ground they might pull something.

Save over 25% with a NOW TV Sky Sports Pass

Catch the action for only £25 a month with this limited time offer. Watch the Premier League, Formula 1, PGA Tour and much more. Cancel any time.

“She’s been amazingly consistent. She won her maiden, got boxed in when we ran her in a conditions race which we won with another filly, but after that she won everything apart from last year’s Arc and this year’s Eclipse.

“Her mental attitude and mental strength set her apart, she’s so determined, positive about her training, but she found her training tougher this year.

“It’s a pity it wasn’t good to soft ground and an even gallop, but it wasn’t. We’d been lucky we’d had that in the two years we won and were second, but today was very different and quite frankly that didn’t play to her strengths at all.

“It was Prince Khalid’s decision to try again this year and whether she runs again will be his decision.

“It’s a long time to the breeding season. She’ll tell us and if she gives me the right signs we’ll see. If she seems like she’s had enough of racing then fine, but it didn’t look that way when she came off the track.”

For Grimthorpe there are too many positive memories with Enable for him to feel downhearted.

“It wasn’t what we’d hoped for, there’s no doubt about that, but we owed her – not the other way around,” he said. “The pleasure she has given us has been exceptional in every way.

“Prince Khalid appreciates keeping horses in training and he accepts (what can happen), it just hasn’t worked out the way we hoped it would.

“The ground was very soft and she didn’t act on it well enough.

“She did get a nasty bump, but they had gone quite slowly and it turned into a bit of a sprint – that’s not an excuse, if she’d been going well enough that sort of thing doesn’t happen, so we can’t say that is why she was beaten.

“She’s been exceptional, but there’ll be no immediate decision – we’ll get her back, look at things, check her out and give it some thought and most importantly come up with an answer.”