Home » Sports News » No sure thing: The two questions at heart of Smith’s captaincy campaign

Such a fun age for Australian cricket. Just as applicants for the vacant chief executive position are being assessed by a board whose chairman is facing a plague of white ants, Steve Smith comes out and makes the captaincy into “A Thing”.

It’s not going to be the CEO’s job to appoint the next captain. The board customarily ratifies a recommendation given by the coach and selectors, but it’s usually one of those Yes Minister deeds where the recommendation is only made when the acceptance is prearranged. 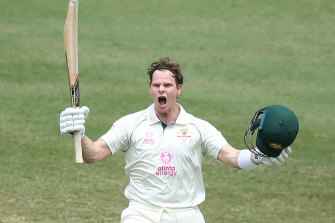 Steve Smith after hitting a century against India at the SCG in January.Credit:Getty

We can now see the ground being laid. Smith, for a start, decided to publicly make it A Thing. He could have continued with recent practice and been passive on the subject. Or he could have called a loud “No”, by saying he did not want the captaincy and would not take it if offered.

Instead, Smith staged an interview with News Corp’s Ben Horne, promoting his academy, to promote his leadership aspirations: he stated explicitly that he would like another turn at the job he lost after the sandpaper cheating scandal in 2018. Former board member Michael Kasprowicz and commentator Brendon Julian have supported Smith’s return. The CA board is set to consider the Smith question. Any more laying of the ground, and you would call it pitch-doctoring.

Smith is entirely within his rights to do so. If he believes he can improve Australia’s chances of success as captain, then he is entitled to put his name forward. But he could not be so naive not to know that he has now made it A Thing, and it’s going to remain A Thing until Tim Paine retires. Moreover, if Smith does not succeed Paine in the job, he has ensured that it will be an ongoing Thing thereafter. Fun times await.

Two questions persist about Smith and the captaincy. These questions can get conflated out in the land of cricket emotions, but they are separate. One is about his eligibility and the other is whether he is the best candidate. 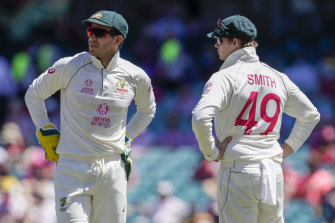 Some fans feel the moral renewal Test captain Tim Paine (left) has achieved with the team would be undermined if the leadership went back to Smith.Credit:AP

The eligibility question is whether Smith, although not under a lifetime leadership ban such as David Warner’s, can be forgiven for his failure of character in 2018. Public polls have found about 45 per cent of respondents say he should never be considered as captain again. I ran a straw poll at a cricket event last weekend and found about 35 per cent believed Smith’s weakness in 2018 is an immutable fact. Once a failure, as someone put it, always a failure. Only over many fans’ dead bodies can Smith be in a conversation for the captaincy. Whatever moral renewal Paine has achieved – a matter that is not beyond debate, as the recent summer showed – would be undermined if the leadership went back to Smith.

While such feelings are strong, genuine and so passionately felt they have the power to bring serious harm to the public image of cricket, I respectfully differ on the question of Smith’s eligibility. As with any sanction, I believe if he’s done the crime and done his time, his slate is clean. Smith did not challenge or run away from his punishment. He accepted it dutifully. Australia was built by emancipists.

Nor do I quite buy the white knight-black knight narrative that says the Australian cricket team was full of morally destitute cheats under Smith before their redemption under Paine’s captaincy and Justin Langer’s coaching. Pushing the boundaries of sportsmanship ebbed and flowed for decades before Smith became captain. He inherited a way of doing things. The Cape Town incident was the first time they were caught in the act, but far from the first time the Australian team’s ethics blackened their name. Under Smith their general demeanour was no worse than under Ricky Ponting, Michael Clarke and Steve Waugh.

Nor did the Australian team turn into choir boys when Paine took over. Paine himself had to apologise for misconduct this summer. Under extreme pressure, they are not the only international cricket team to lapse into shades of ethical grey. Australia have a poor global reputation for these lapses, but it’s a reputation that started before 2018 and didn’t finish then.

That said, Smith’s eligibility will cross-cut with the second question, whether he is the best man for the job. I don’t know how anyone outside the team and its staff can have an informed opinion on this. If Smith is deemed eligible, there is a separate process to determine whether he ought to be captain.

The uninformed opinion might say Patrick Cummins is a rolled-gold natural leader with a spotless record. Cummins enjoys respect from every corner of the cricket community. He has little leadership experience, but nor had some of Australia’s best captains before they were allowed to grow into the job.

The uninformed opinion might also contend that as a fast bowler, Cummins has enough on his plate. Do fast bowlers make good national captains? Australia hasn’t really tried, but then, it hadn’t really tried wicketkeepers as captains before Paine. Geoff Lawson was one of the best Sheffield Shield captains of his generation. Overseas, Courtney Walsh might not have been the sharpest tactician for the West Indies, but he was a superior man manager and a universally admired individual. Jason Holder did a good job until it all got too much. Bob Willis, Wasim Akram and Kapil Dev weren’t too exhausted by bowling to consider who to give the ball to. None of these bowlers was a great captain, but none was more notably incompetent than many of the batsmen who had the job.

Historical precedents are only informative up to a point, and aren’t relevant to the particular team. Only the current Australian players know in their guts who their real leader is. Is it Smith? Only they know.

It would be unfair to hold it against Smith (or anyone else) if they think they have good ideas. Australia lost the recent series to India when they couldn’t clinch two matches they expected to win. There were not enough runs from the batsmen, not enough wickets when the bowlers were needed, and tactically they were outmarshalled by India. Why should Smith not believe he would have given his team a better winning chance? Joe Bloggs reckons he could captain the Australian cricket team, so why not Smith?

If Cummins is perceived, within the team and by the coach and selectors, to be the best successor to Paine, it is up to Smith to submit and play his role as batsman and senior teammate. Having started his campaign, however, he has just made this a little harder for himself, and for another captain.

If those inside the team believe Smith is the best man and he is recommended to the board, the onus is thrown back onto Cricket Australia. It will receive letters of protest and torn-up tickets. It will face criticism from the media, both mainstream and social. It will have to hear from people who say they will never watch cricket again. It will have to face the emotional conflation of the questions of eligibility and suitability, illogical but no less powerful for that. Whoever is in charge – and whatever the captaincy choice – they will need a neck made of brass.

And so the fallout from the stupidity and turpitude of Cape Town continues, three years on. It continues to be a mess of Smith’s making, and he seems to have decided that he can only be fully redeemed by going back to where he was and remaking himself through the captaincy.

The ECB have launched an equality code of conduct