Home » Sports News » ‘One of the best’: Vics search for a solution to curb Smith

Victoria will look to employ a similar leg-side theory to Steve Smith that India had some success with when the Sheffield Shield season reopens at the SCG on Wednesday.

Smith heads into the red-ball clash in fine touch, having posted a carefully crafted century while leading NSW to victory against the Vics in a Marsh Cup one-day win at North Sydney Oval on Monday.

The Vics were able to restrict Smith’s scoring options early with a leg-side field but, typically of a man who is rated as one of the sport’s finest problem solvers, he was able to get moving. 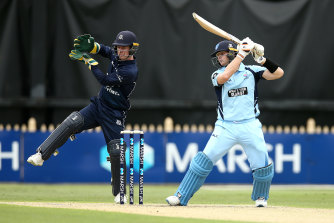 Steve Smith, right, in action for the Blues on Monday. Credit:Getty Images

However, the Vics will be able to attack with the short ball more in the four-day clash, and leg-side catchers are likely to be employed, particularly if spearhead James Pattinson has the ball.

Victorian captain Peter Handscomb said the Vics had plans in place for Smith but added the batting maestro was a difficult man to stop.

“We had a relatively leg-side field during the one-dayer. It kind of stopped him from scoring quickly at the start, then it didn’t matter in the end because he still scored a run-a-ball hundred,” Handscomb said on Tuesday.

“You can have those plans and try and execute them as best as possible but there is a reason why he is one of the best in the world, if not the best. It’s because he can adapt and hit the ball wherever he wants. So, we’ll have some plans, we’ll try some stuff. Ultimately, we’ll try the best we can.”

England, New Zealand and India have all attacked Smith by bowling straight in the hope he would flick a catch to leg-side but all have had mixed success. The reigning Allan Border medallist had a slow start against India but rebounded with a century and 81 on a SCG pitch later rated as “average” by match referee David Boon.

The postponement of Australia’s Test tour of South Africa has meant this match is loaded with talent, despite there being some absences through Australia’s Twenty20 tour of New Zealand.

NSW’s 13-man squad also includes Mitchell Starc, Josh Hazlewood and Nathan Lyon but Pat Cummins, the Blues’ new one-day skipper, will be rested. The Vics have ruled Will Pucovski (shoulder) out – a final decision on whether he has surgery is yet to be made – and he is set to be replaced by Travis Dean at the top of the order.

The Vics, living under lockdown conditions of their home state, were unable to inspect the wicket on Tuesday and will only have their first look before the toss of the coin.

However, one man they are looking to to have an impact is Pattinson, who is set to play only his second first-class match of the summer. Pattinson is keen to finish the summer strongly, and ensure he remains firmly in the Ashes frame next summer. He claimed two wickets on Monday and also supplied some late dash with the bat. 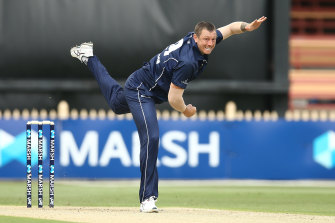 The Vics are hopeful James Pattinson will have an impact against NSW. Credit:Getty Images

“That’s pretty good signs for Australia as well. He was starting to hit the wicket pretty hard and then was able to play some pretty glorious shots with the bat as well,” Handscomb said.

“He is going to be pretty important for us in the back-end of this season. It’s just great to see him up and firing.”

Opening batsman Marcus Harris is also on the hunt for a big score in a summer when he returned to the Test line-up with a tinkered technique, while Handscomb, the forgotten man of Australian cricket, is also determined to remain in the Ashes mix.