Southampton: James Anderson claimed his fifth wicket as England enforced the follow-on against Pakistan on the third day of the third and final Test at the Rose Bowl on Sunday, despite a battling century by visiting skipper Azhar Ali.

Ali (141 not out) and Mohammad Rizwan (53) stitched together a 138-run partnership for the sixth wicket but Anderson helped to ensure the visitors were bowled out for 273 in their first innings to keep England firmly in the driver's seat in Southampton. 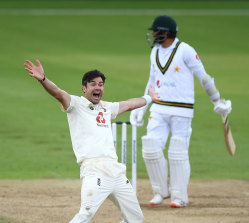 James Anderson is two scalps away from becoming the first quick to take 600 Test wickets following a five-for against Pakistan.Credit:Getty

Rizwan was dismissed after tea off a Chris Woakes delivery with Jos Buttler pulling off a diving catch to his left. His departure exposed Pakistan's tail as England ruthlessly pressed home their advantage despite Ali reaching his 17th Test century.

Stuart Broad claimed his first wicket of the Test when he had Yasir Shah caught by Joe Root at second slip on 20 and struck again to dismiss Shaheen Shah Afridi for three, with Buttler taking another spectacular catch behind the stumps.

Mohammad Abbas was next to depart after being run out on one following a comical mix-up with Ali, who was attempting to retain the strike.

Anderson (5-56), who had claimed his fourth wicket of the innings in the opening session, completed his 29th five-for in Tests when he enticed Naseem Shah (0) to edge to Dom Sibley at third slip to wrap up the Pakistan innings.

Play was stopped due to bad light before Pakistan could bat again, with the visitors trailing by 310 runs.

Zak Crawley (267) converted his maiden century into a double ton and shared a record-breaking 359-run partnership with Buttler (152) as England declared their first innings on 8-583 on Saturday.

England, who hold a 1-0 lead, are edging towards their first Test series win over Pakistan since 2010.

The hosts won the opening match in Manchester by three wickets, and the rain-hit second game ended in a draw.