The novices’ handicap chase run on the opening day of the Cheltenham Festival has been scrapped and replaced next year by the 2m 4f Mares’ Chase.

The track had undertaken a consultation process to decide which race to drop, with the National Hunt Chase and Fulke Walwyn Kim Muir Handicap Chase — both for amateur riders — believed to be among those under threat.

The new Grade Two race, to be known as the Mrs Paddy Power Mares’ Chase, will be staged on the Gold Cup card on day four. 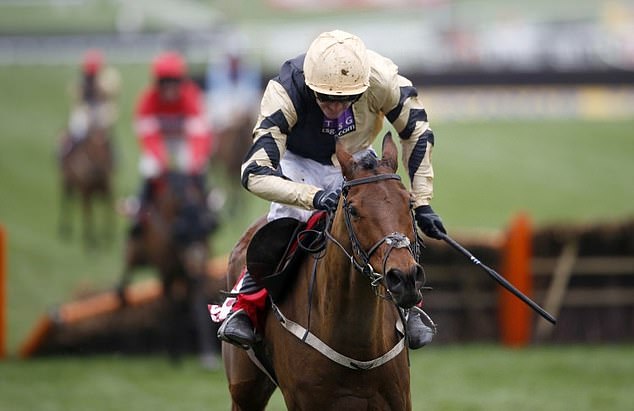 Welcoming the new mares’ chase 11-time champion trainer Paul Nicholls said: ‘It will he positive impact that it will have on the racing industry. There will certainly be plenty of good mares in both Britain and Ireland to contest it and I hope to have a good candidate in Laurina. It looks like the obvious race for her.

Ruby Walsh, winner of 59 races at The Festival, added: ‘The Mares’ Chase will prove a great addition to The Festival, especially when it beds in over a three or four year period. Jumps horses rarely have a financial value when they finish racing but for owners who are lucky enough to have a good mare, they can be worth a considerable amount as brood mares and thus owners get some return on their investment.

‘Therefore the need for mares-only races is paramount for the value of unraced fillies, to encourage owners to buy them as racehorses. Cheltenham are showing their support to the breeding industry by adding this race and in my opinion showing a loyalty to the whole horseracing industry and not just the sport.’

Meanwhile, a foot abscess has ruled Nicky Henderson-trained Verdana Blue out of Saturday’s Cesarewitch Handicap at Newmarket. The mare was a 10-1 shot and leading contender after a strong-finishing third in the Ebor Handicap at York.

SHALE is 11-4 favourite with Coral to give trainer Donnacha O’Brien the fourth group one win in his first season as a trainer in Friday’s Fillies’ Mile at Newmarket. The Ryan Moore-ridden filly won the Moyglare Stud Stakes at the Curragh on her latest run.

Donnacha O’Brien has had to retire Fancy Blue, the filly who have him his other two group one wins in the French Oaks and Nassau Stakes after she sustained a tendon injury.

Fancy Blue had been due to run in the Prix de L’Opera at Longchamp but was a late withdrawal when horses trained by members of the O’Brien got caught up in a contaminated feed issue.

Dean Smith: Grealish is working hard in the gym to cope with fouls

Jose Mourinho: Tottenham not looking at Premier League table yet
Recent Posts
This website uses cookies to improve your user experience and to provide you with advertisements that are relevant to your interests. By continuing to browse the site you are agreeing to our use of cookies.Ok