Australian captain Meg Lanning has allayed concerns about Ellyse Perry's fitness as the Aussies look to gather momentum against Bangladesh at Manuka Oval on Thursday night.

Having edged past Sri Lanka in Perth on Monday, the Australians still have little room for error after their first-up Twenty20 World Cup loss to India, needing to beat the World No.9 Bangladeshis in the nation's capital. 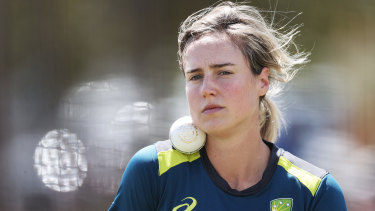 Ellyse Perry has been managing a shoulder issue since November.Credit:Getty Images

Superstar all-rounder Perry was spotted with her shoulder strapped at Perth airport on Tuesday but Lanning insisted there was no cause for concern.

Perry has been managing a shoulder issue sustained while fielding for the Sydney Sixers during a Women's Big Bash League match against the Melbourne Renegades in November, however Lanning said there was no consideration to giving Perry a rest.

"It's something she's been managing since the WBBL but she's trained every time we've been out there training and she's played every game.

"It's nothing that's going to keep her out of any games or anything like that.

"She'll train fully today. I'm sure there's a few players in this competition who are managing injuries.

"She's a professional and she deals with it really well so we're not expecting anything major out of that."

Fellow all-rounder Sophie Molineux was set to be assessed after training to determine her availability for the match against Bangladesh.

The spinner hasn't played for the national side since sustaining a corked thigh at training earlier this month.

"She's coming along well, she'll train today and then we'll assess how she pulls up from that and see if she's available for selection tomorrow night," Lanning said.

"It's a wait and see, it's been very frustrating for her and for us to not have her available, but she's doing everything she can to get back."

Lanning said she welcomed the scrutiny surrounding her side following a slow start to the tournament.

"It was great we were able to grind out a win the other night. Hopefully that win is a bit of a kick-starter and gives us a little momentum.

"Every game is a must-win. In the past and we saw it the other night, this group has really embraced the pressure and played well in big moments.

"Heading into this World Cup we knew there was going to be pressure. It's nothing we weren't expecting and we've played well in the past when we're under the pump."

Group rivals India and New Zealand also do battle on Thursday, meeting at Melbourne's Junction Oval in the afternoon.