Former Black Caps star Chris Cairns has spoken for the first time since the spinal stroke during life-saving heart surgery that left him paralysed in the legs in August.

Cairns, 51, shared a video message on social media in which he said the health battle “will provide me with possibly the greatest challenge I’ve ever faced in rehab going forward”.

In the minute-long video, he also thanked the surgeons, doctors, nurses, and specialists who looked after him in Canberra, where he lives, and Sydney, saying: “You saved my life”.

“Just over six weeks ago, I suffered a type A aortic dissection, which essentially means there’s a tear in one of the major arteries of the heart,” began Cairns, in his first post on Twitter in seven years.

“I had several surgeries and grafts and very thankfully the specialists were able to save the heart itself.

“One of the complications that arose was a spinal stroke which in itself will provide me with possibly the greatest challenge I’ve ever faced in rehab going forward. 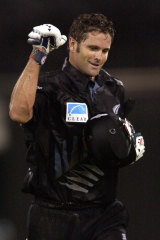 “Huge thanks to the team here at Canberra Hospital, to St Vincent’s in Sydney, the surgeons, the doctors, the nurses, the specialists – you saved my life.

“Thanks also [for] all the well-wishes that have been sent through to Mel, my wife, and I. Uplifting, humbling, and so, so special.

“I’ll keep posting to keep you along on the journey as it goes, but please, thank you so much and much love to everybody.”

When Cairns suffered the aortic dissection, he was rushed from Canberra to Sydney, where he underwent emergency heart surgery at St Vincent’s Hospital.

He has since returned to Canberra and was set to begin his rehabilitation in a specialist spinal unit.

NZ Cricket Players Association boss Heath Mills told Stuff earlier this month its Cricketers’ Trust – which is available to all past players to apply for – was assisting Cairns and his family.

“We have been in regular contact with Mel Cairns and the family, through our personal development manager Paul Hobbs.

“Obviously it’s an awful situation for Chris and the family, and we are supporting them where we can.”

Chris Cairns made his Test debut in Perth in 1989, just four years after Lance farewelled Test cricket at the WACA Ground. He played 62 Tests and 215 ODIs until his retirement in 2006.

At the peak of his powers, Cairns was named one of the Wisden’s five cricketers of the year in 2000.

One of New Zealand’s greatest all-rounders, Cairns was a key figure in the Black Caps’ 2-1 series win in England in 1999, and their only 50-over world title in the ICC Knockout Trophy in Kenya in 2000.

Love is a deserved favourite for the Arc – Dettori

Major shake up to series as Inter Dom returns to NSW