A small field and battle of tactics gets the meeting under way on a track rating that might be downgraded as it unfolds. Progressive filly 5. Queenmaker had come through a couple of much tougher metro races before a dominant on-speed maiden win at the provincials 19 days ago. Couldn’t be fitter and shapes as the best-weighted runner in the race. 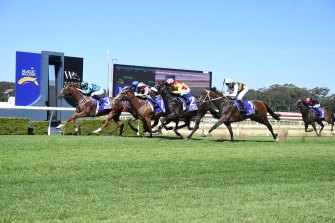 Racing returns to Wyong on Tuesday.

Dangers: Tough three-year-old 3. Roccaforte has been close-up in his last two at Hawkesbury after a heavy track maiden win, and also finds a thinner race. Gap to the rest headed by country three-year-old 2. King Kikau who has stuck on OK in his last two, and draws to get a nice trail; while improving mare 6. Gracious Gracie can run into the minor end of the prize.
How to play it: Queenmaker to win. Odds and Evens: Odds.

Not much depth in this over the mile, and that augurs well for improving metro three-year-old 2. Regal Pom who can break through third-up. Hasn’t been overly suited in two tougher runs this prep, and gets out to her preferred distance on suitably soft ground.
Dangers: Lightly raced 3. Flyway is a clear threat fourth-up peaking out to the mile. Stuck on well enough after working from the wide draw in that same last start race as the top selection, and afforded a more economical run here. Keep safe home-track filly 4. Oakfield Redgum who rushed home late second-up, and wants the longer trip. Gap to the rest.
How to play it: Regal Pom to win. Odds and Evens: Split

Progressive metro three-year-old 4. Roma Avenue finds a breakthrough race third-up. Hit the line well after being ridden quieter at Canterbury 12 days ago after disappointing from the front first-up. Gets away from very heavy tracks, and dropping back to provincial company from a softer draw, looms as the one to beat.

Dangers: Resuming filly 7. Cairdeas is a big watch behind two improving trials, and that trial jockey stays on. Track the betting on Northern Hemisphere-bred 3. Inuwashi who resumes for a leading trainer/rider combination after two quiet trials, and blinkers going on. Honest US-bred colt 5. Rovers Pepper and provincial filly 8. Exo Angel are worthy exotic runners.
How to play it: Roma Avenue to win. Odds and Evens: Split

Just one country-based runner going around in this. Hard to go past Hawkesbury filly 6. Verzenay from an ideal draw third-up. Did her best work late resuming here before being ridden too close when chasing home the winner at Newcastle 17 days ago. Carries the same weight in what shapes as a thinner field, and is ready to win.
Dangers: Got plenty of time for 2. Diamond Tipped who resumes off a near seven-month break with blinkers removed. In good provincial hands, and given three weeks since a smart trial win at this track. Obvious watch on Pariah colt 5. Separatist who boxed on OK when debuting in tougher city company; while expecting a good fresh run from ex-Victorian 7. Martini Crusader first-up for the new Hawkesbury stable.
How to play it: Verzenay to win. Odds and Evens: Split

Intriguing and open sprint for the juveniles with a few on debut. One of those, metro-based I Am Invincible filly 9. Millybella, shapes as a smart one in the making. Has been rock solid through the line in two trials, and bred to thrive in rain-affected ground.

Dangers: Must include metro colt 2. Nonshaalant who was no match for the winner at his third start, but draws well, and that form line is a solid reference for this. Keep safe too Deep Field filly 5. Cruizingdafield who led for a long way on debut in town, and has reportedly come on well from that run. Beautifully bred Godolphin filly 6. Perpignan has good natural ability, although did plenty wrong in her first prep. Has trialled OK, although likely to drift well back and may need the run, but watch for her late. Snitzel filly 11. Winnertakesitall resumes for a strong city stable off a fair trial.
How to play it: Millybella to win and box trifecta 2,5,6,9. Odds and Evens: Split

Progressive filly 1. Sneaky Paige can pounce here third-up coming through superior metro form lines. Flashed home late behind a smart one first-up before only battled to the line in a stronger BM 72 three weeks ago after an awkward start and behind a filly with big wraps. Connections have shown their hand back in this class.
Dangers: Big watch on resuming 2. Allusionist behind two trials and comes to hand quickly. Ridden a little quieter off the fence, provincial mare 10. Kyalla can give a big sight third-up with an important gear change; while 8. Notifies can push on after a tough provincial maiden win at his second start, although drawn wide.
How to play it: Sneaky Paige to win. Odds and Evens: Split

Moderate race in similar class over the mile, and there are a few chances. Lightly raced and improved four-year-old 2. Sovereign Express finished best from the trail to win his provincial maiden third-up, draws to get cover, and this isn’t much tougher.

Dangers: Watch the betting on metro four-year-old 1. Believe So who resumes from a handy draw behind a soft trial. Improving filly 4. Beenvane was good late in a similar race at Newcastle when four weeks between runs, and has been kept on the fresher side again; while 7. Equivada is a knock-out chance at big odds stepping up from an off-speed country maiden win when jumping at $61.00.
How to play it: Sovereign Express to win. Odds and Evens: Split

The likely most open race on the program is saved for last, with several chances. Like talented provincial filly 5. Terrameades who reloads off a 45-day break and a steady trial. Put two wins together up to BM 64 provincial grade early in the prep before mixed efforts in much deeper metro company. Tends to race best when on the fresher side, and drawn to get the right run just off the speed.

Dangers: Plenty of them headed by 7. Air To Air who hit the line late resuming in a Midway. Keep safe four-year-old imported mare 9. Siyata who will likely go a long way back from the draw, but has proven to be a big finisher in two runs over the past five weeks. Included in wider exotics underrated mare 10. Linguee resuming; 12. Highly Ambitious with blinkers on third-up; and 17. Skyray off a last start country BM 68 win if he gets a start.
How to play it: Terrameades to win and box exacta 5,7,9. Odds and Evens: Odds

News, results and expert analysis from the weekend of sport sent every Monday. Sign up for our Sport newsletter