Track Likely Good 4 and rail out 2m so should play fairly even.

The boys gets us rolling with a competitive sprint at set weights, and local 3YO gelding 4. I'm On Break is the one to beat resuming. Trialled nicely, and on debut last winter hit the line hard to just miss in a similar race.
Dangers: Scone 3YO gelding 3. Glendor was easily run over by a smart debutant second-up, but has early speed which will suit her more around this track, and also getting on to firmer footing. Wyong 3YO gelding 7. Mathematics showed sharp improvement third-up in a handy maiden at Scone, and can peak for this draw.
How to play it: I'm On Break to win
Odds and Evens (First 2): Split 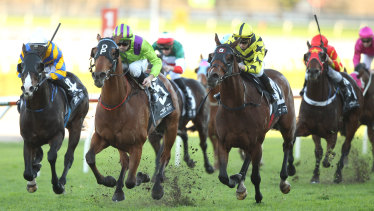 A seven-race card is scheduled for Tamworth on Tuesday.Credit:bradleyphotos.com.au

Now the girls' edition, and it's a much tougher and wider battle. Scone 3YO filly 10. Nana Neddy (Swiss Ace x Nana Jean by Rock Of Gibraltar) debuts for form stable off two solid trials, the latest sat on speed but was never pushed. Previous trial finished right behind Two Big Fari who has since won two of three this prep, including a Highway at Rosehill on Saturday.
Dangers: Newcastle filly 12. Solvency (Unencumbered x Real Desire by Wanted) debuts for prominent trainer-rider combination off an easy trial. Watch the market on rival Scone filly 11. She's Unusual who returns off a trial, but took on deeper opposition in a brief first prep; while home track filly 13. Trelise is drawn out, but can improve second-up getting back on top of the ground.
How to play it: Nana Neddy to win
Odds and Evens: Split

Still with the maidens, but out to the mile, and improving 4YO Walcha mare 6. Mistress Rosetta gets her chance to break through at 13th start. Was well backed when finishing okay in a stronger field at Scone, and drawn to get a charmed run off the speed with cover.
Dangers: After four runs back, local 4YO gelding 14. Treble Clef can peak here first time at the mile and down in weight. Like the rest of the field that day, Newcastle filly 9. Serriano was no match for dominant winner Pride Of Adelaide on the Beaumont track, but previous two runs in handy company were good, and she can peak fourth-up out to this trip. Armidale 4YO gelding 2. Luck In Running has been up for a while, and isn't far away from breaking through. Finished hard this trip here two runs back, and again will want a good tempo up front to chase. Include Wyong filly 10. Sister Wife in exotics at third start from the inside draw and dropping a little in quality.
How to play it: Mistress Rosetta each way and trifecta 6,9,14/2,6,9,10,14/2,6,9,10,14
Odds and Evens: Evens

Good depth and plenty of chances here. Exciting 3YO Newcastle gelding 1. Mbappe can take the next step after zooming home to win his maiden at Scone in dominant fashion.
Dangers: Well bred 4YO Scone mare 9. Pure Faith put paid to them easily second-up in the heavy at Gilgandra, and draws to get a lovely trail just behind the speed. Trainer scratched her from Bathurst on Monday to be saved for this. Liked the way improving 3YO Muswellbrook gelding 2. Chargement found the line behind a smart horse at Scone, and should be peaking third-up. Moree mare 6. Solar Panel has run on okay in her last two at BM 58 level, but draws an awkward gate. Consistent Narromine filly 10. Sue's Girlfriend should get an economical run from the draw; while 3YO Wyong gelding 5. Elusive Eagle was only even through the line behind Animate and Chargement at Scone, and will need to improve.
How to play it: Mbappe to win and quinella 1 and 9
Odds and Evens: Odds

Good quality race over the mile. Not getting off talented 4YO Newcastle mare 2. Star Alibi who has proved costly in two runs back. Seemed to get lost back in the field last start at Muswellbrook before finishing strong, and can show her class third-up at this distance down a little in weight.
Dangers: Newcastle 6YO gelding 6. Geegeeaye is having by far his best prep. Only missed a place once in last five, including a dominant Class 1 win here two runs back, although this is a slightly tougher test. Narromine 5YO gelding 5. Quick Spin flew home in a Highway at Randwick two runs back, then didn't shirk the task leading in a Highway over longer last start. Hard fit, but but will probably be ridden much quieter here from a wide draw. If 4YO Muswellbrook gelding 7. Sir Leo gets even luck from the wide gate, he can power into the finish. Was close-up here and at Muswellbrook before doing it tough in a Highway at Randwick; while 4YO Newcastle mare 8. Delchuzy keeps finding the line, but keeps finding a few better. Back down in weight for a stronger race, and the visors have been applied.
How to play it: Star Alibi to win
Odds and Evens: Split

Another wide open sprint, with plenty of hopes. Gunnedah mare and former Victorian 2. Class Aplenty made a grand NSW debut charging home from a mile back to win similar race nearly a month back, despite being unwanted in betting. Will try to repeat the dose drawn wider, but up to 61.5kg and facing more depth.
Dangers: Scone mare 6. Hardspot has ability, but was only fair first-up at home when easy in betting, and up sharply in weight. Gosford filly 5. She's Smart cruised home to win her maiden second-up at Forbes, and draws the inside, but this is a significant rise in grade and weight. Despite a moderate win record, don't under-sell 7YO Inverell mare 9. Ruby Two Shoes who also flew home late here two runs back behind Class Aplenty, and draws to do little or no work back in the field.
How to play it: Class Aplenty each way and box exacta 2,5,6
Odds and Evens: Split

It doesn't get any easier for the boys' edition. Relying on slotting in somewhere from a wide draw with 5YO Port Macquarie gelding 6. Zioptimus who can break a lengthening drought second-up. Charged home first-up in a stronger BM 58 at Taree, and leading country hoop back on is a big plus around this track.
Dangers: Been a long while since 5YO home track gelding 10. Raided won his maiden, but is hard fit, and hit the line well in the heavy this grade at Walcha. Senior rider gets back on from a favourable draw. Moree 7YO gelding 4. Captain Eyche capped some consistent form with an easy Class 2 win here. Up sharply in weight, but again draws to park in a lovely trailing spot right behind the speed; while track the betting on lightly raced local 4YO gelding 16. Policy who has been racing against stronger, and was scratched from an earlier race.
How to play it: Zioptimus to win and quinella 6 and 10
Odds and Evens: Evens

Good sprint to finish, and hard to see smart 3YO Scone filly 1. Emperor's Star being beaten after a dominant first-up win this trip at home running good time. Drawn okay, and can seal a crack in metro company.
Dangers: Local 5YO gelding 2. The Launcher can have another crack at chasing the top selection home after sticking on well at Scone, and gets a 2.5kg turnaround in the weights. Wellington gelding 9. Demonize will get a soft trail from the draw, and dropping back to his pet trip, looks the only other chance.
How to play it: Emperor's Star to win and quinella 1 and 2
Odds and Evens: Split