Australia have earmarked all-rounder Mitchell Marsh to be a part of the side's one-day international resurgence, as the five-time world champions aim to end years of underperformance in the format.

The Australians have slipped to No.5 in the world rankings and face an imposing task to topple last year's World Cup winners in their conditions when the three-game series starts on Friday night. 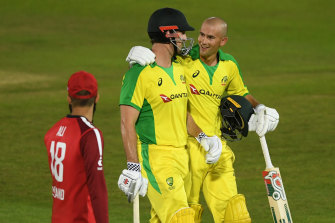 The next World Cup is not until 2023 but Australia's selectors want to nail down their best side sooner rather than later so as to avoid the 11th-hour overhaul they underwent in the final months leading into last year's tournament.

Though they defied the odds to make the semi-finals, Aaron Finch's side have won just two of their past nine games in the 50-over arena.

Veterans Usman Khawaja and Shaun Marsh, and all-rounder Marcus Stoinis have since made way from Australia's top six.

Marsh has taken Stoinis's position and will get another crack at making the all-rounder's role his own. His last two performances in the green and gold have seen him receive player-of-the-match honours, raising hopes he can finally match his considerable potential with performance.

"We've probably been guilty of shuffling him around to try and fit some other pieces in there at certain points. He's someone we've got a lot of confidence in. Each time he's had an opportunity he's played really well for us.

"He's got a great opportunity in the next couple of years to cement that spot; I've got huge confidence in him."

Marsh's confidence should be high after steering Australia to victory with the bat in the final match of the Twenty20 series.

"The way he's matured, the parts of his game [he needed to improve] he's made some great changes in that area," Finch said.

"I've got no doubt in the near future, the most consistent Mitch Marsh will be on show."

Australia put their 50-over performances under the microscope in 2018 after nearly two years of poor results, and resolved to play a style which better suited their personnel. Dynamic hitters such as Chris Lynn and D'Arcy Short were among those to make way.

"Over the last couple of years we're still searching for our best formula and 11 players day in, day out in the one-day format," Finch said.

"I don't think there's been any secret to that. There's been great opportunities we haven't nailed consistently in this format. We've played some really good cricket in patches and indifferent in other patches.

"It's important we get our processes right in one-day cricket. T20 cricket, although we finished 2-1, I think our process and structure was really sound.

"We just mis-executed in a couple of positions … but we're still searching for what's the best formula in this format."

Alex Carey will return behind the stumps after losing the gloves to Matthew Wade in the T20 series.

The series is Australia's first in world cricket's new ODI Super League. The top seven nations in the 13-team competition qualify directly for the 2023 World Cup.

Diogo Jota explains plan to muscle Liverpool trio out of first team
Recent Posts
This website uses cookies to improve your user experience and to provide you with advertisements that are relevant to your interests. By continuing to browse the site you are agreeing to our use of cookies.Ok