There were smiles and emotional embraces as the Australian women’s cricket team touched down on home soil on Tuesday afternoon after their mighty World Cup final win against England in New Zealand at the weekend.

The team arrived at Melbourne Airport on a charter flight from Christchurch about 1.30pm and walked out of the arrivals gate to a small crowd of cameras and reporters just before 2pm, trophy in hand. 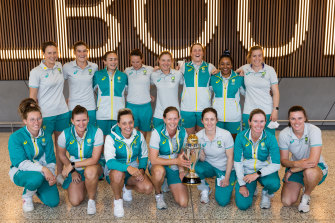 All-rounder Grace Harris was the first cricketer to walk through the arrival gates, with teammate Alana King melting into the arms of parents Leroy and Sharon in the hall shortly after.

Meanwhile, a smiling Megan Schutt had her hands full, pushing her luggage trolley with one hand and a pram with daughter Rylee with the other.

Captain Meg Lanning was among the last to emerge from the gate, carrying the coveted World Cup trophy on her luggage trolley and being cheered on by her teammates.

Lanning, alongside teammates Alyssa Healy, Rachael Haynes and Ellyse Perry, has been at the core of the team’s success on the world stage over the past five years, which culminated in the return of the global 50-over crown in Christchurch on Sunday. 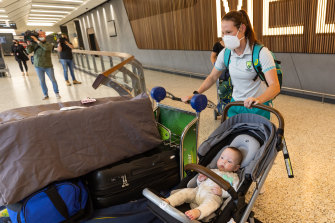 “We had a pretty clear goal of what we wanted to achieve over in New Zealand and to do that in the way that we did it’s really special,” Lanning told reporters.

“There was certainly a lot of celebrations going on and sort of taking it all in. We were pretty lucky to be able to stay at the ground for a fair bit and just sort of go through what we’ve achieved and what it all looked like. There’s certainly a couple of nights we’ll certainly remember.”

Lanning said the team’s success hinged on its squad mentality, which centred around every player bringing value and skill to the team, instead of relying on one or two top performers.

“We went over to New Zealand with a completely different squad, a different mindset and to be able to play that well and go through undefeated is a great testament to the team and the hard work that we’ve put in not just the players but the support staff as well,” she said. 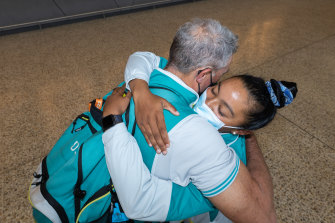 It was an emotional farewell as the team parted ways after landing in Melbourne.Credit:Jason South

The team has already set its sights on the upcoming Commonwealth Games and T20 World Cup, but Lanning said she looked forward to enjoying a break before contemplating what the next two years will hold.

“The Commonwealth Games are going to be really exciting. It’s a new opportunity for us something we haven’t done before,” Lanning said.

“We’re certainly very excited to get that chance to represent our country at a competition like that and then the world cups keep coming, with the T20 again next year.”

There were emotional embraces in front of photographers and TV crews as team members farewelled each before parting ways to different sides of the country.

Our Breaking News Alert will notify you of significant breaking news when it happens. Get it here.

Newmarket next stop for Benbatl after Goodwood return

Race-by-race preview and tips for Newcastle meeting on Thursday