Even by his travelling standards, this is some sort of raid on the Central West by leading metropolitan trainer Bjorn Baker.

The Warwick Farm-based horseman has always been a fan of kick-starting campaigns in the country, and he saddles up one of his strongest young teams at Tuesday’s feature meeting at Orange, and punters won’t have to wait long to see how he fares. 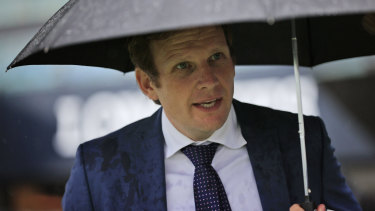 On what is sure to be a firm surface, the stable sends out two well-touted three-year-olds in the opening Maiden Hcp over 1000m.

Heading the list is striking Winning Rupert gelding Rupertson, who finally makes his debut off a string of spaced trials, highlighted by a six-length romp at Kembla five weeks ago, although he has to do it from the outside barrier.

Drawn more towards the middle, stablemate filly Little Miss Magic gets the blinkers added after she bungled the start on debut at Newcastle before making up plenty of ground.

Throw in dual trial-winning four-year-old Strixen from the Gary Portelli yard, who hasn’t raced since January, and this western city duo can set the stage for what could be a lucrative roadshow.

The Baker stable then has promising three-year-old Cinque Torri lining up in a Class 1 Heat of the Rising Star over 1400m.

After his impressive maiden win on the South Coast churning through heavy ground from midfield, he looks well capable of going back-to-back, although not surprisingly stablemate Hard To Excel, himself off an impressive heavy track maiden win only eight days ago, looms as the biggest danger.

But with a real eye to the future, perhaps Baker’s most intriguing runner is four-year-old mare Twice On Sunday second-up in a good quality Benchmark 74 Hcp over 1400m.

After doing it tough from a wide gate first-up in a metro BM 64 at Warwick Farm, the stable had no hesitation in floating him west to restore confidence.

A daughter of Japanese sire Real Impact, Twice On Sunday has a smart second-up record, and during her last prep in winter beat some very handy fields at the provincials.