Newcastle trainer Kris Lees sees a lot of Scone Cup winner Rustic Steel in Never Talk and Wandabaa as they line up in the Dark Jewel Classic at Scone on Saturday.

Both mares are in form but just need luck at the right time to return to the group 3 winner’s circle, like Rustic Steel had in winning The Coast and Friday’s Scone Cup in the space of six days. 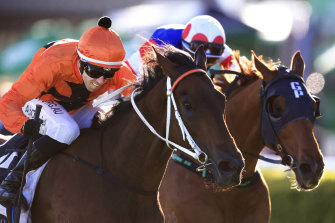 Never Talk will love the soft ground for the Dark Jewel Classic at Scone on Saturday.Credit:Getty

Lees wondered if he had done the right thing with Rustic Steel, when he took the blinkers off before The Coast, but he has his answer a week later.

“He has been going really well and the blinkers coming off was something I thought about, but you never know with things like that,” Lees said. “It’s a great decision now and he really found the line there, when he had to.

“He has been racing well and just needed that little change of luck. It’s been a good week for him. I guess we put him away now and get ready for the big dance after that.”

Rustic Steel might have controlled The Coast from the front last Saturday, but in the Scone Cup he was there to be beaten but was too tough in holding off Dr Drill and Atishu.

After the Scone Cup success, Lees gave a cheeky grin when asked about the big Scone double with Never Talk and Wandabaa in Dark Jewel Classic on Saturday.

The pair of mares enjoys soft ground and with a shade of luck either could have won the Hawkesbury Crown last time. Instead, they were on the placegetters’ heels as Exotic Ruby, a rival again on Saturday, won at Hawkesbury with Never Talk fourth and Wandabaa fifth.

“The track is going to be nice and chopped up by the time the Dark Jewel comes around,” Lees said. “That won’t be a problem for my pair, they will handle the soft track and they are in good form, they just need that little bit of luck.”

Never Talk is a $6 chance and Wandabaa $10 for the group 3, where Le Gai Soliel is the $4.40 favourite, but Lees is confident about their prospects.

“Never Talk might have drawn wide, but she gets back and always needs that touch of luck,” Lees said. “She got home hard at Hawkesbury and this track will suit her, especially the way it is racing with the backmarkers getting home.”

But Lees sees a real upside in Wandabaa after Hawkesbury mainly because she will be getting to the outside.

“She just got twisted sideways in the Crown at the top of the straight and probably should have finished closer,” Lees said. “She has also drawn wide in the Dark Jewel and that’s a good thing with her.

“She runs her best races when she is to the outside of horses. She went terrific and won the Newmarket at home [Newcastle] at the start of this prep and it was the same in The Hunter in the spring when she got to the outside [where she was second to Lost And Running].

“She is just one of those quirky mares that needs a bit of room to show her best and I think she should get it [in the Dark Jewel].”

Lees will be watching from Melbourne as he tries to qualify Luncies for the Melbourne Cup in the Andrew Ramsden Stakes at Flemington and believes the biggest thing in his favour will be a dry track.

“I’m looking forward to seeing him on firmer ground. It has just been 10 after 10 in Sydney and I think everyone is sick of it,” Lees said. “He can handle it but he is better on top of the ground.

“He stays well and was third in the Chairman’s Quality and then just got too far back in the Sydney Cup and that was the end of his race because nothing made ground that day.

“He is a quality stayer and it’s a chance to get him into the Melbourne Cup, which you don’t get every day.”