Tour de France riders passed coronavirus tests to confirm their good health only to endure numerous crashes along the Atlantic coastline when the race resumed on Tuesday.

Sprinter Sam Bennett prevailed ahead of Caleb Ewan to post his maiden Tour stage win, while Primoz Roglic avoided the many crashes that punctuated the 168.5-kilometre route from Ile d’Oleron to Ile de Re by keeping the yellow jersey after stage 10. 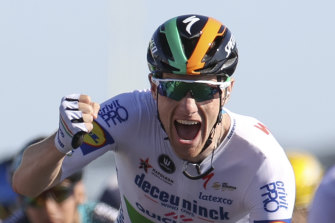 Ireland’s Sam Bennett celebrates as he crosses the finish line to win stage 10 of the Tour de France.Credit:AP

After the first rest day included 841 tests of all 166 riders and team staff, every rider was cleared to start stage 10. But Tour director Christian Prudhomme was forced to abandon the race after testing positive for the virus. Four staff members from four different teams also failed the test and were dropped from the race bubble.

Under sunny skies in western France, Stefan Küng and Michael Schar made an early break but were kept on a leash.

On flat roads exposed to winds, the main teams rode at full speed at the front of the pack to avoid getting caught in crosswinds, limiting the gap to less than two minutes. 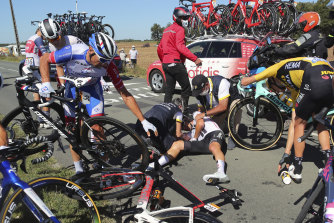 Nicolas Roche, centre, is treated by medics after falling during the tenth stage of the Tour de France. Credit:AP

The nervousness in the pack was detrimental to several riders including Robert Gesink and Nicolas Roche, who hit the tarmac at more than 55km/h with about 100 kilometres left. The crash split the bunch and the pair of breakaway riders was swallowed soon after.

Another big pile-up involving Martin and Slovenian hopeful Tadej Pogacar occurred in the town of Rochefort after a rider apparently hit a median strip and fell.

Both men rejoined the peloton after Martin received a new bike and was escorted back by three teammates.