Cricket Australia's high-stakes battle with its free-to-air television partner has taken another twist, with Seven West Media believing the game's governing body has nullifed their $450 million broadcast deal by making a force majeure claim on the upcoming season.

Threatening to terminate its six-year contract to show Australian cricket because of a talent drain in the Big Bash League, Seven has briefed leading Melbourne silk Neil Young QC. 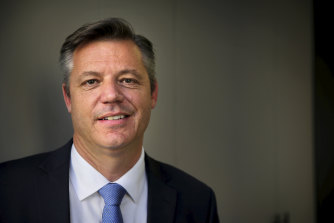 The barrister is fresh from a victory in the high-profile Federal Court case brought by the Australian Securities and Investment Commission against former Tennis Australia directors Harold Mitchell and Steve Healy over a $300m Australian Open television deal with Seven.

A courtroom is where the showdown between cricket and its FTA broadcaster may have to end up being thrashed out as well if crisis talks this week between interim CA chief executive Nick Hockley and Seven's CEO James Warburton are unsuccessful.

Seven is furious at the prospect of dozens of top players being unavailable during the two-month long BBL this summer because of the plan to secure them in COVID-19 bubbles for international matches, and as it stands Warburton is declaring the network won't turn up to televise the tournament.

It has now emerged that CA has triggered the force majeure, or 'Act of God' section, in its broadcast contract, which refers to unforeseen events beyond the control of either party, as it amends its originally released 2020/21 schedule.

Received as an admission the season would be affected by the pandemic, sources at Seven say an initial notice a month ago was withdrawn when met with anger at the network before another version was issued by CA in the past fortnight.

Seven executives argue the claiming of a force majeure event gives the company the right to terminate its contract, which is believed to include a clause that specifies CA must deliver matches at least equivalent with world's best standard and at no less than the level of the previous season.

Aside from more players being absent during the Big Bash, the potential moving of the Boxing Day Test from the MCG to Adelaide, the proposed use of venues such as North Sydney Oval for BBL matches and limitations on crowds are other examples Seven may use in claiming they are not receiving a premium product.

According to sources at head office, meanwhile, CA has its own outside legal advice that it is on solid ground as long as it delivers the season as promised in terms of volume. Asked about the force majeure notice, a CA spokeswoman declined to comment.

Either way, there is a lot riding on a meeting in coming days between Warburton and Hockley, who the Seven boss didn't miss in branding CA a "train wreck" and "the most incompetent administration I've work with" last Friday.

The CA hierarchy maintains Warburton is simply talking a big game in an effort to secure a significant markdown on their $82m annual fee, having inherited the reins of a network which paid too much for the rights two years ago and whose primary task is reducing its enormous debt.

Warburton, however, is adamant Seven don't want the Big Bash, which it tried unsuccessfully to sell to Network Ten earlier this year, and whatever the outcome of the current stand-off will be getting out of cricket altogether when its deal ends in 2024.

The hostility points to a very real challenge for the game down the track in retaining the value of its rights in what is hopefully a post-coronavirus world. They ballooned two years ago as Seven and Foxtel paid $200m a year between them but the decline in appeal of the bloated BBL, on top of the landscape around media companies and the impact of the pandemic, leave them in danger of going backwards.

For now, however, there are more pressing matters ahead and there will be pragmatism required to navigate beyond them. As former Test captain and CA director Mark Taylor said Nine's Sports Sunday: "Cricket is in a tough spot".

Tension escalates as Seven calls for Big Bash to be slashed