Perth: Mignon du Preez has displayed nerves of steel to inspire South Africa to a shock six-wicket victory over England in a thrilling T20 World Cup clash at the WACA Ground. 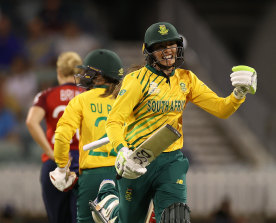 Mignon du Preez guides South Africa to victory over England in the T20 Cricket World Cup at the WACA on Sunday night.Credit:Getty Images

She scored a four next ball to secure the win with two balls to spare. 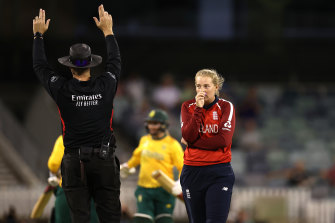 South Africa are ranked sixth in T20 cricket, but their win over world No.2 England has given them an excellent chance to make it past the group stage.

England's next match is against minnows Thailand in Canberra on Wednesday, with South Africa taking on Thailand two days later.

In a topsy-turvy match, England's slow start to their batting innings cost them dearly.

England were crawling along at 4-75 after 15 overs before plundering 48 runs from the last five overs.

Natalie Sciver held the innings together with 50 off 41 balls, while opener Amy Jones chipped in with 23.

Shabnim Ismail provided the highlight in the field, running at full pace to take a great catch in the deep to dismiss Heather Knight.