Home » Sports News » Started with ‘a bit of jealousy’: How Aussie climbed to miracle Tour result

Paris: Ben O’Connor has transformed from self-described “outlier” to man of international interest after producing one of Australia’s best performances on debut at the Tour de France.

The 25-year-old on Sunday became only the fourth Australian in 108 editions of the Tour to finish top five on general classification, a result he’d previously said would take a miracle. 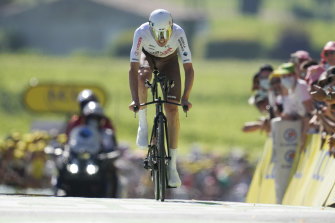 Dream debut: Ben O’Connor is the fourth Australian to finish in the top five. Credit:AP

The 22-year-old won three stages en route to what was a commanding title victory that left his rivals fighting for minor places well before the race concluded in Paris on Monday morning (AEST). Jonas Vingegaard (Jumbo-Visma) and Richard Carapaz (Ineos Grenadiers) rounded out the podium, finishing more than five minutes in arrears of Pogacar.

O’Connor, who joined French team AG2R Citroen this season, finished fourth, performing well above even his own expectations. He also leaves the Tour with a stage win to his name, having celebrated a solo victory in Tignes on the first summit finish of the race in the Alps.

It’s a fair achievement given O’Connor only started racing in his late teens after becoming jealous of a friend who had a road bike. 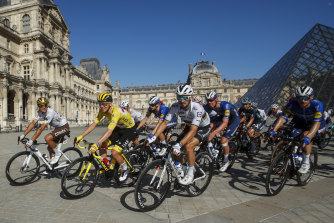 Yellow jersey Tadej Pogacar leads the peloton past the Louvre on Sunday.Credit:AP

“I was a very good runner at school and when I finished school, he was asking me to go riding. That’s how I started, just a bit of jealousy! Now you’re here,” O’Connor said.

The understated climber never felt like he was part of the Australian cycling fraternity coming through the ranks, but his name is now in the history books alongside undisputed champions including Cadel Evans, who won the Tour 10 years ago, Richie Porte, who finished third last year, and pioneer Phil Anderson. Evans finished fifth on debut in 2005 and Anderson 10th in 1981.

“The Tour de France is long, and you have to always keep fighting. You never know what the outcome is going to be,” O’Connor said. “You can see the time gaps this year are huge and I think almost in every Grand Tour now the time gaps are getting bigger and bigger because of how hard the racing is, and you just explode. It was resilience and being told by the team: don’t lose hope. 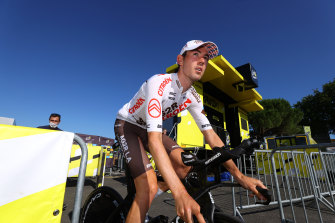 “Thanks to all the Aussie supporters. I’ve heard a lot of support and even if I don’t reply to everything it’s been touching to hear.”

Porte, who in the “twilight” of his career opted to play a support role at the Tour this season, riding for Carapaz, identified with O’Connor, who came through the same domestic pathway as him.

“Looking back on the race last year, now I think it means a lot more to me that I finished here on the podium because it’s a tough bike race,” Porte said.

“It’s been really great to see him doing what he is doing. He’s a big talent, we all knew that.

“He also gave me a hand in the Dauphine to win as well, so it’s nice to see him flying the flag.”

The 21st and last stage of the Tour is ceremonial for title contenders and Pogacar did the winner’s press conference after Saturday’s penultimate time trial stage.

Before that, UAE Emirates staff members had gathered around a TV at the team bus to watch the Slovenian in the time trial, cheering and warmly embracing each other as he crossed the line, the Tour won.

It was an especially emotional moment for retired Australian racer and revered sports director Allan Peiper. Peiper didn’t work at the Tour this year as he continues a fight against cancer. However, the 61-year-old travelled to Saint-Emilion to watch Pogacar bring it home. Peiper has become a kind of guardian to Pogacar since the pair started working together at the 2019 Cadel Evans Great Ocean Road Race in Victoria.

“He lost his passport the day we were meant to go home,” Peiper recalled. “It was Australia Day and I had some friends help me get in touch with the consulate, the embassy and got him out on a flight. I realised he stayed really calm.

“He’s a really respectful kid, that’s all it is. It comes down to respect.

“He’s so spontaneous. He just wants to race, he just wants to get out there and attack and have fun. As long as he can keep that spirit I think he’ll be up there for a very long time.”

Pogacar was on the same page when talking about his second Tour win, which he, in conversation with the press, has for the duration approached with a maturity and composure beyond his years.

“For me, it’s like similar to when I was playing games or sport with my brother and friends when I was a kid. I always tried to win and have fun, enjoying the sport and the battle between each other,” he said.

When asked to name a highlight of his race, Pogacar, who has dismissed statements that he is the embodiment of a new era, had every reason to be self-orientated and boastful but wasn’t.

“I think my favourite moment, one of the favourites, was the [stage 17] win on Col du Portet after such teamwork, and also today, before the start, seeing Allan Peiper,” he said.

“He came for the time trial after he start feeling better. It was pretty emotional at the start. I was super happy to see him after a few months. I was really happy he could be here today to support me.”

‘Beers over Skype’: NSW win Sheffield Shield without having to take the field