State chairs and Cricket Australia are back in conflict over the issue of the governing body’s next leader, ahead of an in-person meeting before day two of the Adelaide Oval Ashes Test match.

Sources told The Age and The Sydney Morning Herald that the CA Board have expressed a preference for the next full-time chair to be an internal choice from one of the current nine directors, after Earl Eddings was compelled to resign on the eve of the AGM in October when he lost the support of half the six states.

However this preference is likely to be hotly debated among the states, CA’s interim chair Richard Freudenstein and the Australian Cricketers Association chair Greg Dyer, who will also be present for the meeting. 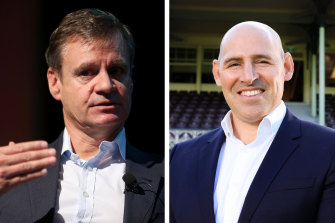 There is a view among some states that CA, having lost two chairs in a row in acrimonious circumstances – Eddings’ predecessor David Peever was also compelled to resign after losing the support of Cricket New South Wales in the wake of the 2018 culture review – should seek a consensus chair from outside the board.

That chair would, in turn, be able to work as an honest broker in subsequent discussions about the governance structure of CA, which was called openly into question by the chairs of Queensland, Chris Simpson, and NSW, John Knox, over the past two years.

By contrast, some chairs believe that the appointment of a director from within the current board – Freudenstein, Mel Jones, Lachlan Henderson, Michelle Tredenick, John Harnden, Vanessa Guthrie, Paul Green, Greg Rowell or Mike Baird – would leave the new chair still battling some of the legacy issues of the recent past.

These have continued beyond Eddings’ resignation, most notably in the conflict between Cricket Tasmania and CA about Tim Paine’s exit as the men’s Test captain, an event the state’s chair Andrew Gaggin decried.

“Tim Paine has been a beacon for Australian cricket over the past four years and instrumental in salvaging the reputation of the national team after the calamity of Cape Town,” Gaggin had said.

“Yet, at a time when CA should have supported Tim, he was evidently regarded as dispensable. The treatment afforded to the Australian Test captain by Cricket Australia has been appalling, and the worst since Bill Lawry over 50 years ago.”

While the six states have differing views, and several felt that Eddings was treated harshly in the manner of his exit, they agree that a wider discussion of the way CA directors are appointed is overdue, a decade after the governing body moved to an independent board of directors appointed jointly by states and CA through a nominations committee.

That compromise was forced by the South Australian Cricket Association and its then president Ian McLachlan, who were implacably opposed to the concept of the SACA not being able to choose its own representative on the CA board.

Equally, there is concern about distance between CA directors and some states, an issue exacerbated by the way COVID-19 has increased the degree of difficulty for directors travelling from state to state and drastically reducing the amount of in-person meeting time that can engender trust and respect.

CA’s balance of six directors jointly-nominated by the states and the central body, plus four independent directors chosen on a skills basis, is seen as being close to the right mix. But there remains a considerable degree of unease about the danger of too many directors coming from corporate backgrounds at arm’s length from a full investment in the game.

Sports news, results and expert commentary. Sign up for our Sport newsletter

Late call on Cheltenham race for £100,000 bonus seeker The Shunter