Josh Hazlewood only bowled five balls to a rampaging Ben Stokes during the climactic hour of his Headingley masterpiece in 2019.

A sequence worth 4, 6, 6, 2, 1 as England closed on their target had Australian captain Tim Paine quickly withdrawing a bowler who, otherwise, was a constant threat in that series.

A couple of years on, and Hazlewood’s increasingly canny Twenty20 skills, shown for Chennai Super Kings in the IPL and now for Australia at the World Cup, illustrate how the most consistent member of the Test bowling attack might be better-equipped should a similar battle be rejoined during the Ashes this summer. 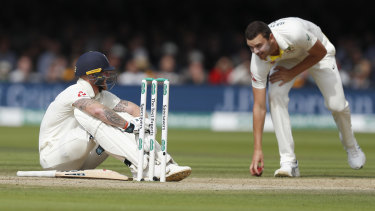 Ben Stokes and Josh Hazlewood during the 2019 Ashes.Credit:AP

“There’s certain things I’ve thought about trying if I was in that situation,” Hazlewood confessed when asked about whether he’d have done things differently if he knew then what he does now. “The more T20 you play, the more confident you’re going to get in those change-ups and putting them into practice in that day four or five scenario, which we had in Headingley.

“There’s certainly opportunities, depending on how the game’s flowing and whether a team’s trying to set-up a chase or are chasing a total on day five and the wicket’s still good. There’s often not a time restraint on the batting, in terms of runs against balls, so you probably can’t go wide yorkers and different things, you’ve got to try to get the player out.

“You have to have your own tricks, rather than using the wicket, so there’s certainly times, probably when the tail’s slogging at the end and the line and length is probably the easiest ball to hit, you can start with some slower balls or slower ball bouncers and just put them out of that rhythm. So, there’s certainly times within Test matches where your T20 bowling comes into play.” 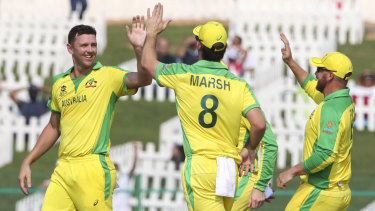 Echoing the words of Nathan Lyon, Hazlewood said he was eager to see Stokes make it out to Australia at some point during the Ashes, having started training again after finger surgery and a break from the game.

“Absolutely you want their best team here, so I’m happy if he comes out,” Hazlewood said. “He’s a class act, so if it strengthens their team it’s all the more competitive.”

Against South Africa in Australia’s T20 World Cup opener, Hazlewood was at his Test match best in an opening spell that set the tone for a miserly display from Aaron Finch’s bowlers. He related that, in the IPL, he hd essentially worked on a double-bluff, staying consistent, particularly early in the innings, against batters who were expecting him to try other things.

“So they’re expecting something different, and I keep doing the same thing and make them hit fours and sixes off your good deliveries – just above the stumps, a hard length – and that seemed to be working for the last few weeks in the IPL, and again last night.”

As for how the T20 World Cup and then quarantine in Queensland will affect his Ashes preparation, Hazlewood stated that what he needed most were some long, red-ball focused training sessions in Australia prior to the first Test at the Gabba.

“In all the formats I tend to bowl pretty similar, except at the back end of T20s,” he said. “But my first two overs up front, that’s pretty much how I’m going to bowl in Test cricket, so I don’t really notice as much difference, red or white ball.

“It’s more the miles in the legs … one or two big days of training where we might bowl 14-16 overs in a day with some fielding, and if we get that under our belts then I’m fine. I don’t feel like I need a match of any sort, it’s about getting one or two big training days here or there and I’m fine.”

Mack The Man and Shakeem Up'Arry square off

McFabulous lives up to the hype with easy Kempton win