Seven West Media wants Cricket Australia to abort the Big Bash League this summer and is surprised CA chairman Earl Eddings has not intervened in a bid to help ease the multimillion dollar fight that has overshadowed the start of the new season.

Sources with direct knowledge of discussions at Seven said the network had repeatedly called for the 10th edition of the BBL to be scrapped amid a raft of demands, including changes to the Test schedule to protect its advertising dollar. Seven maintains this stance for the BBL but CA has laughed this off during negotiations. 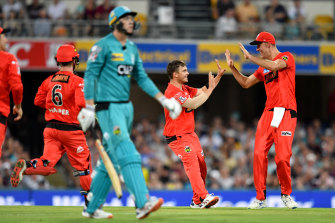 The Big Bash League is a point of contention in the dispute between Cricket Australia and broadcasters. Credit:AAP

Seven does not want the four Tests against India to finish in Brisbane in mid to late January, arguing it will lose even more money under this extended schedule, for the advertising rates are not as lucrative at this time as they are when the Test series traditionally finishes in Sydney, with the New Year's Test during the key holiday period.

Foxtel and Seven are due to make their next payment instalments of $25 million and $33 million, respectively, on Tuesday but Seven is unlikely to do so. One option under consideration is to pay an instalment.

Sources at the network said the BBL is in need of a reboot with a fixture that is less impacted by the international schedule. An independent report by broadcasting guru David Barham had urged CA to give the BBL a three-week window in January leading into the finals – a point CA ignored. If the BBL had been cancelled, Seven would have been due a refund.

It has also emerged the network fears losing more Australian talent to an Australia A series against India, with three red-ball matches over three or four days proposed.

The debt-laden, free-to-air network already loses $70 million a year in broadcasting the sport and sources at Seven remained defiant on Saturday that CA cannot deliver the quality of schedule the network had signed on for, and thereby deserves a reduction in its $82 million-a-year fee. It also has $25 million of production costs per year in the six-year deal.

Seven's concerns are not only about the quality of content this summer, over fears it will be a diluted product because of a need to play in hubs with weakened line-ups as there will be an extended Test squad, but they also are related to falling ratings and attendances in recent years.

However, CA has pointed out overall attendance last summer was more than one million for the third time and its average broadcast ratings were 185,000 more per match than what the AFL and the NRL enjoyed last year. CA also plans to turn this year's tournament into a travelling "carnival" and said the success of the tournament has been reinforced by naming rights sponsor KFC extending its contract.

"We couldn't be more excited to be scheduling a full Big Bash tournament. The BBL is a much loved feature of the Australian summer and will continue to play its role in bringing families together over the school holidays. That's more important this year than ever before after such a tough winter," CA chief executive Nick Hockley said on Saturday.

Seven is desperate for CA to inform it on how many players will be needed in an extended Test squad this summer where players will remain in a travelling bio-security bubble. The network believes this could be up to 10 players, meaning a squad of more than 20, robbing the BBL of local talent.

Hockley reached out to Seven chief James Warburton on Friday but no progress was made. Sources at Seven remain surprised Eddings has not done more to ease the issue, pointing to the efforts of AFL chairman Richard Goyder and NRL chairman Peter V'landys in their sports. CA has refused to be goaded into a verbal war with Seven and maintains it is on strong legal ground.

The push by India's Board of Control for Cricket to have the white-ball series shifted to the start of the summer has given Foxtel an advantage for these matches are exclusive to the pay television provider, allowing it to promote its coverage of the BBL. Foxtel is also seeking a reduction in its rights but has yet to make a public statement.

This comes as CA and the BCCI were in discussions over the weekend to finalise the schedule for Virat Kohli's men, who appear set to quarantine in Adelaide. CA is also awaiting state government approvals.

Aquis Farm chooses Farnan as its runner in The Everest