Australia’s captain Meg Lanning is not shy in expressing how much she struggles with the myriad unfamiliar scenarios presented by the rare Test matches her side plays.

Placed under sustained pressure by India on the Gold Coast last week, the hosts were fortunate that rain cut out almost a full day/night’s play. Otherwise, they may well have been taken to the brink of defeat at the seasoned hands of India’s captain Mithali Raj and spearhead Jhulan Goswami. 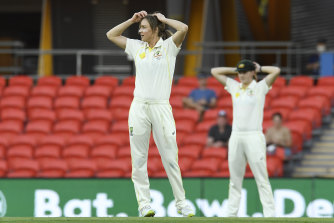 It was a frustrating Test match for Australia, but India must win all three T20s to claim the series.Credit:Getty Images

Now, however, the Australians return to Twenty20, a mode in which they are far more comfortable, to the point, Lanning said on Wednesday, that they won’t need to think much at all about how they will approach the series. It will be the first time Australia rejoin T20 battle with India since the storied World Cup final at the MCG in March last year.

“Everyone found the last week of the Test a challenge in a different way,” Lanning said.

“It is a format we don’t play a lot and probably don’t have the experience of different situations, so that challenges you.

“You’ve just got so many unknowns and you’re not sure how to approach situations because you feel like you haven’t been there before. That’s the cool part about Test cricket, trying to work through the situations and find your way to get through.

“But now, coming into the T20 format, it’s something we know reasonably well, everyone is pretty clear on what their role is and how it looks for them. There’s no real thinking about what you do when you go out there. Especially as a batter, you go out there and try to score as quickly as you can – that’s as simple as it is.”

Neither Raj nor Goswami are part of India’s younger T20 side, which will be led by the fit-again Harmanpreet Kaur. Australia will, after some delay, get the chance to unleash Tayla Vlaeminck’s pace and bounce on the tourists, who have improved with each match of the series so far. A fresh pitch has been prepared on the Gold Coast’s drop-in wicket block.

“We still think we can improve a fair bit in all three areas of the game, we haven’t nailed that throughout the series,” Lanning said. “We were excited today in our team meeting to get back into T20, focus on that a little bit, and it’s all been about how we can get better and play our best cricket.

“I know the group’s got a bit of a buzz around it at the moment, just to be able to go out there and play with real freedom, and we really understand what we need to do.”

Kameko to run in Epsom Derby as favourite after 2,000 Guineas victory