Tubby’s take ahead of day five

Harris squanders opportunity as Australia close in on victory

‘Travis Head and Marcus Harris started the series with questions over their places in the Australia XI. One man is now ensconced in Australia’s middle order but the other’s place in the team hangs by a thread, heading into the Boxing Day Test.

Harris squandered a gilt-edged opportunity to lock himself in for his home Test, one of three wickets to fall in a dramatic first hour on Sunday that gave England a skerrick of hope of avoiding a near impossible run chase. But junk-time half-centuries to Head and Marnus Labuschagne soon had the visitors back on their knees, a position they have become accustomed to across the first eight days of this series.

It will take a dramatic form reversal by England’s bedraggled middle order on Monday to prevent the Australians from completing a significant win and taking a 2-0 lead to the MCG. At stumps on day four, the tourists were 4-82, still 386 runs from victory. They are hanging on to the hope they can force a draw but that appears a near impossible task, if their form to this point of the series is any guide.’ 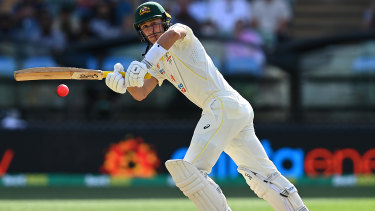 Labuschagne works a ball into the leg side on day four. Credit:Getty

We’re back for day five

Welcome back to our live blog coverage of the second Ashes Test at the Adelaide Oval.

It seems a matter of time before Australia wrap up the fifth Test. The tourists still need another 386 runs to win and have six wickets in the bank. Ben Stokes would need to bat for most of the day for England to have any chance of drawing this Test. It would be some story if he could. 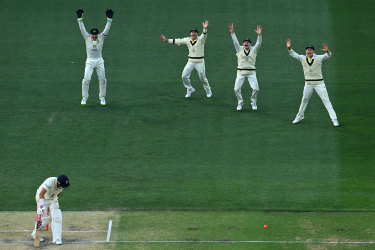 Dom Bess: It was a 'tough pill to swallow' after being axed by England