Victorian spin bowler Todd Murphy will be named in the first Australia A squad to travel overseas since the onset of Covid-19, having vaulted into Australia’s calculations after just two Sheffield Shield appearances in as many seasons.

On a tour to Sri Lanka where around 40 players will be present across Test, limited overs and Australia A squads, the youthful slow bowling trio of Murphy, New South Wales wrist spinner Tanveer Sangha and Queensland left-armer Matt Kuhnemann are set to give selectors a look at the future beyond Nathan Lyon. 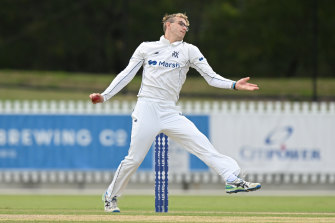 Victoria’s Todd Muprhy sends one down against Tasmania in March.Credit:Getty Images

Murphy’s selection is, in a way, a mirror of Lyon’s own leap from obscurity, chosen for Australia A and then the Test side in 2011, less than a year after he was primarily employed as a groundsman at Adelaide Oval.

With two four-day matches to be played by Australia A while the senior side is locked in an ODI series against Sri Lanka, the likes of Lyon, Mitchell Swepson and Ashton Agar may also be invited to the long-form bowling crease to groove their wares before the two Test matches in Galle.

Sources with knowledge of planning told The Age and The Sydney Morning Herald that while Cricket Australia hoped to commence a less stringent post-Covid era on the Sri Lanka trip, it was still possible a charter flight would be required to transport the squad. 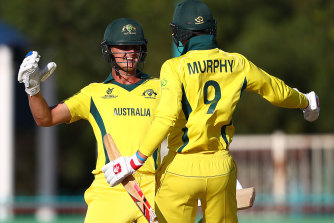 Connor Sully and Todd Murphy celebrate a final-ball win in the under-19 World Cup in 2020.Credit:Getty Images

Murphy, 21, has been tutored by the noted spin bowling coach Craig Howard. He turned in a match-winning display for Victoria with both ball and bat against Tasmania at Junction Oval in his only appearance of the season – he made his Shield debut against South Australia the previous summer.

Against the Tigers, Murphy plucked match figures of 7-146, bowling with flight, loop and guile reminiscent of the young Lyon. He then walked out to bat at No. 10 for Victoria and helped Mitchell Perry secure a memorable victory with a ninth wicket stand of 47.

Bailey, the selection chair, has indicated the team intended to persist with Swepson after his difficult Test match beginnings in Pakistan.

“A great challenge for Swep to see what that challenge was like and to have the opportunity to pump a huge amount of overs and get that challenge of what it’s like to try to work top-order batsmen out,” Bailey said recently.

“Knowing Swep and chatting to him post it, he sets pretty high standards for himself and I think given the impact he’s had with Queensland over the last couple of years, when he gets an opportunity to bowl that much, he expects to impact the result.

“He’ll only get better and better – there’s no other opportunity you can provide that can fast-track that learning than what he’s just had.”

Elsewhere in the A squad, the apprenticeship of Henry Hunt as a top-order batter of the future is expected to accelerate.

Hunt, originally from NSW, has impressed many observers with his cool visage at the batting crease, turning in consecutive 600-run seasons for South Australia and playing for Australia A against the England Lions last summer. 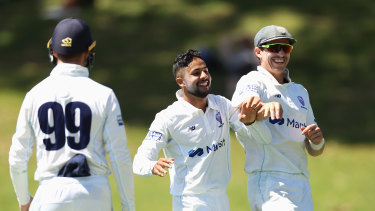 The senior squads will be at full strength after the conclusion of the IPL, meaning Test captain Pat Cummins, Steve Smith, David Warner, Josh Hazlewood and Mitchell Starc are all present for the tour.

Jhye Richardson, who narrowly missed a CA contract when the list of players was announced by Bailey earlier this month, will likely get the chance to start earning enough points to gain an incremental deal by having a place in the white ball portion of the squad.