Lavaur: A team leader in the one-day classics, Wout van Aert turns into a domestique deluxe come the Tour de France, yet it has not stopped him annexing two brilliant stage wins in three days when allowed to play his own card by Jumbo-Visma.

The Belgian won the prestigious Strade Bianche and the Milan-San Remo "Monument" classic earlier this month, when he had the whole Dutch outfit at his disposal for the one-day events. 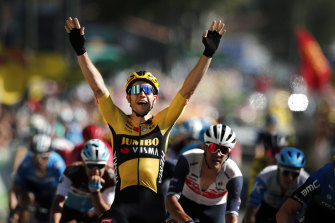 Yet on the Tour, Van Aert's main job is to protect his leaders, Primoz Roglic and Tom Dumoulin, on the flat stages, and to pull the team in the mountains.

When circumstances allow, though, as on Friday's chaotic stage seven, he can be let off the leash to devastating effect.

He performs a job very similar to that of former Milan-San Remo and ex-world champion Michal Kwiatkowski, at Ineos Grenadiers.

"We've had a bit of small talk with Michal, and it's true that he has a very important role with Ineos," Van Aert, a man of few words, told reporters after his stage win.

While most with his uncommon talent might balk at domestique duties, Van Aert is enjoying himself, citing the team's mindset as key to his own success on the race.

"It's a different approach of course," the 25-year-old said.

"In the cycling world, our leaders know they're nothing without guys that help them.

"I know this very well because in a lot of races, I'm a leader myself. It may be hard to explain with words but if you have leaders like Primoz and Tom, they're thankful."

When he's not burying himself with his mountain slogs, Van Aert gets his own chance to shine, and his leaders do their bit to repay him.

"Today, Tom kept me in position in the last four kilometres and it cost him some energy, but he knew I could win," he said.

Van Aert, however, knows there are some limits to his freedom. While he could go for the green jersey for the points classification, he understands it would be detrimental to the team's main goal of overall victory.

"It costs a lot of energy and it's just not possible to do my work for the team and focus on the intermediate sprints and bunch sprints," he said.

The Tour burst into life when a fast start and crosswinds blew the peloton apart in the seventh stage, leaving dark horse Tadej Pogacar with a lot catching-up to do ahead of the Pyrenees on Saturday.

Friday's 168-kilometre ride from Millau had a brutal start from Peter Sagan's Bora-Hansgrohe team and crosswinds had split the pack.

A sudden acceleration by champion Egan Bernal's Ineos Grenadiers team split the leading pack again with Slovenian Pogacar, one of the most fancied underdogs in the race, finding himself trapped behind and losing 1:21 on the line.

The 21-year-old UAE Emirates rider is now expected to be on the attack in the Pyrenees this weekend.

"In the finale, we've seen an opportunity and we took advantage of it to split the bunch. The Tour de France is also won in stages like this one," said Bernal in a reminder that talks of an Ineos Grenadiers demise had come way too early.

Briton Adam Yates, along with Roglic, Bernal and Pinot, was on the right side of the break and retained the overall leader's yellow jersey. 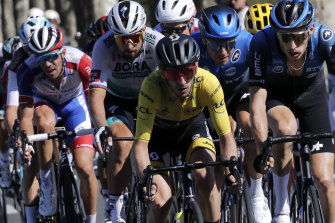 "We were expecting an easy day today but Bora had other ideas. We rode full gas from start to finish, it was a hard day for everybody," said Yates.

After a couple of extremely quiet days, the peloton was thrown into a tumbler when Bora-Hansgrohe's attack on the first climb left most of the sprinters behind.

That boosted Sagan's quest for a record-extending eighth green jersey for the points classification.

Green jersey holder Sam Bennett, as well as Australian Caleb Ewan, were left far behind and could not contest the intermediate sprint, where Sagan collected 17 points after being beaten by only Matteo Trentin.

Dubai World Cup card off due to coronavirus