Victoria's cricket boss has declared young star Will Pucovski ready for the mental challenges of Test cricket on the eve of his likely promotion to Australia's squad for the series against India.

Pucovski and fellow young gun Cameron Green are expected to be named in the 17-man Test squad to be announced on Thursday, alongside under-pressure opener Joe Burns, whose place in the XI is in doubt after a wretched run in the Sheffield Shield. 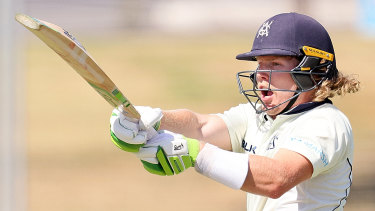 Will Pucovski is expected to be named in Australia’s Test squad on Thursday.Credit:Getty

Pucovski has twice been close to earning a baggy green, only to make himself unavailable for selection due to mental health concerns. The 22-year-old, however, has said he is now ready to make the step up to the Test arena, a view supported by Cricket Victoria's high performance boss Shaun Graf.

"He's way further advanced than when he got selected last time; he's a lot more comfortable in his own skin and the way he's performed certainly shows that," Graf told The Sydney Morning Herald and The Age.

"All the indications for him from making runs and how he's handled the situations in each of the matches, and the added pressure of the press writing up his double tons, he seems to be in a really good position, a really good space. I think he's ready to make the next step if he was to be selected." 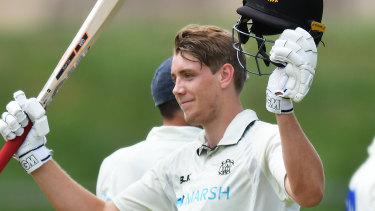 Cameron Green is destined for greatness, according to many experts in Australian cricket.Credit:Getty

Selectors Trevor Hohns and Justin Langer had previously stressed the incumbents were not under any pressure to keep their spots, but Pucovski has mounted a compelling case to unseat Burns.

With just 57 runs from five innings, Burns may need a big score for Australia A next month to fend off Pucovski's challenge.

In the Queenslander's favour is the successful opening partnership he has formed with close friend David Warner – a point noted by selectors, albeit before Pucovski's white-hot form.

Green appears set to claim another reserve batting spot but may need to wait for his debut with Travis Head and Matthew Wade among the runs in the Shield.

The all-rounder's chance could come in spin-friendly Sydney if selectors deem a seam-bowling option in the team is required in order to play two frontline slow bowlers.

Green has resumed bowling after recovering from stress fractures in his back, but former selector Greg Chappell and Western Australia coach Adam Voges have both cautioned against placing too much pressure on him with the ball.

Abbott has starred with bat and ball in the Shield to storm into Test calculations and though he may not have the score on the board like the frontline quartet of Pat Cummins, Mitchell Starc, Josh Hazlewood and James Pattinson, he does have overs under the belt.

Swepson, the leading wicket-taker in the Shield, has gone to another level but, barring injury to Nathan Lyon, will not be in contention until the Sydney Test.

Selectors will also name the Australia A squad on Thursday to take on the touring Indians in two games at Drummoyne Oval and under lights at the SCG.