Home » Sports News » What is a handicap in horse racing and how does it work?

It certainly stopped the mighty Phar Lap in 1931, when, in that year’s Melbourne Cup, he was forced to carry a record weight of 10 stone and 10 pounds (68 kilograms) and could only manage to finish eighth. 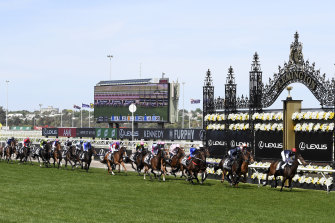 The Melbourne Cup is Australia’s most famous handicap race.Credit:AP

So what is a handicap in horse racing, and how does it work? Few are as authoritative on the subject as Greg Carpenter, Racing Victoria’s chief handicapper and executive general manager of racing.

What is a handicap?

Carpenter says the idea is to impact the performance of the contestants, so that competitors of lesser ability have an opportunity to compete on a relatively even playing field with competitors of greater ability.

“In golf, we understand the handicap is strokes against par, which is meant to even up the outcome between high-quality golfers and lower quality golfers,” he says.

“In athletics, a race like the Stawell Gift, the handicap is by distance. Faster runners start further back from the finish line than slower runners, by definition of previous performance.

“And in horse racing, the factor seen to impact performance is weight, and the idea is that, as additional weight is given to horses in a race with the highest established performance levels, it will slow them down and allow lesser-performed horses who are carrying lighter weight to be competitive.”

Most horse racing in Australia is run under the handicap system, where horses are allocated weights based on their past performances.

Those past performances are used to give a horse a handicap rating, which then helps the handicapper allocate each horse’s jockey a weight for a particular race, comparative to their opponents. The better-performed the horse, the more weight it carries.

That’s why Phar Lap carried an unbelievable amount in his final Australian start, having achieved more than any other horse before him (and arguably since!). 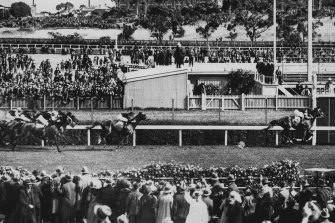 Some of Australia’s great races are run under handicap conditions, none more famous than the Melbourne Cup.

The best horses in the field – such as those who have won previous editions of the Cup, or those that have won group 1 races in Australia and overseas – usually sit at the top of the weights, and then those less credentialled horses carry less weight.

Champion sprinter Black Caviar carried 58 kilograms when she won the 2011 Newmarket Handicap, going into the race with a 9-0 record. She never again raced at handicap grade, as she would have had to lug too much weight. 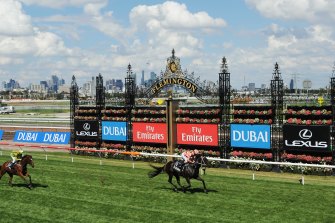 Not all races in Australia are handicap races

That’s why champion horse Winx continued to run in the Cox Plate, where she beat up on horses at equal weights.

“That’s the equivalent of a 100-metre Olympic final in running, where everyone starts level on the track,” Carpenter says. 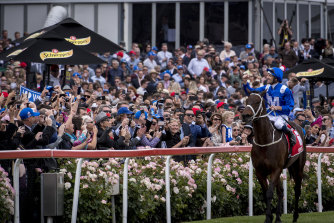 Winx and jockey Hugh Bowman salute the crowd after winning the Cox Plate for the fourth time.Credit:Eddie Jim

“Handicap races like the Melbourne Cup and the Caulfield Cup are the equivalent of the Stawell Gift.

“The handicapper imposes their views on the race, in athletics by meterage and in [horse] racing by weights.”

If Winx had ever run in a handicap race such as the Melbourne Cup, she likely would have carried well above 60 kilograms.

What is involved in rating a horse?

One of the tasks involved in coming up with weights for a horse is first giving the horse a handicap rating.

The rating system uses a scale of numbers that reflects a horse’s overall established performance, with a focus on its most current form. Most horses who win a race for the first time receive a handicap rating in the 60s. Then their rating can change based on their performances, with the best horses getting up into the 130s. But most horses tend not to be raced in handicaps when their ratings get that high because they get too hefty a penalty.

A horse with a handicap rating of 120 running in the Melbourne Cup would be right among the top weights; a horse rated 110 would naturally carry five kilograms less (half a kilo for each rating point).

Like a golfer who carries a handicap that sets their starting score in relation to a par-72 course, a horse carries a handicap figure based on what it has achieved to date. But calculating a horse’s handicap is not as simple as counting the number of strokes taken over 18 holes. Two horses with the same handicap rating could easily be at different stages of their career. 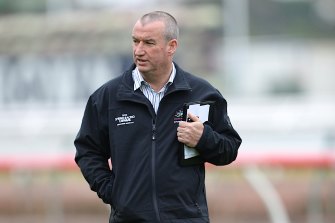 “It’s a numeric value at a point in time that reflects the prior achievement, with an emphasis on recent form.”

After running in a race, a horse can receive a new handicap figure to reflect their form.

A handicapper may use the performances of other horses in the race to calculate a higher handicap rating for the winner and placegetters, or a lower figure for those who are unplaced.

Age and gender also play a role in the allocation of weights to a horse.

Two horses might both have a handicap rating of 100, but a younger horse may carry less weight than an older horse to provide an allowance for maturity. Female horses are also given a weight allowance against the males.

“If you use a human analogy, if you had the Olympic 100-sprint gold medallist running against the fastest 15-year-old in the world, you would assume the 15-year-old is not fully mature, that they’ll be running much faster when they’re 21 or 22.

“So if you were to manufacture a race where they finish together, you would look at their maturity and give the 15-year-old a significant head start.”

What is the point of a weight penalty?

Winners of races such as the Caulfield Cup attract a weight penalty for the Melbourne Cup, to reflect their form and provide relief for those who were beaten when those horses again meet on the first Tuesday in November.

Melbourne Cup favourite Incentivise was handed a 1.5-kilogram penalty last month for his Caulfield Cup demolition job, with Carpenter aiming to give his rivals a greater opportunity of winning when they next meet. 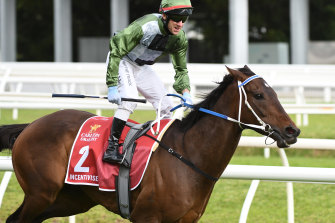 Incentivise won the Caulfield Cup and has been given a 1.5-kilogram penalty for the Melbourne Cup.Credit:Getty Images

Weight penalties are only required for handicap races where the weights have been set well before the race is due to be run.

“In the context of the Caulfield and Melbourne Cup, where we have future nominations and weights are released well before the race, the concept of a penalty is for the handicapper to acknowledge form after the release of the weights,” Carpenter says.

“It’s to reflect emerging form, new form, after the weights are released.”

Only winners of handicap races can be penalised en route to a race such as the Melbourne Cup, and the winning margin is often factored into calculations when deciding on a penalty.

But Carpenter wanted to make it clear – despite it being called a “weight penalty,” the aim is not to prevent that horse from winning future races.

Incentivise may have thrashed his opponents at Caulfield, but they’ll have a greater weight advantage when they meet again in the Melbourne Cup.

How does weight affect a horse’s performance and does the distance of a race play any factor?

It can be argued that the difference of a few kilograms is insignificant when you consider a horse weighs, on average, about 500 kilograms.

But Carpenter says there’s no doubt weight impacts performance, particularly the further in distance the race is.

“For example, races over a longer distance, performance is impacted more by weight than it is in shorter distance races,” Carpenter says. 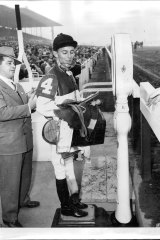 Australian jockey Neville Sellwood weighs in after winning a race in the US in 1951.Credit:AP

He explains: “If you’re going to carry your shopping to the car 60 metres [away], you should be OK. But if you’ve got to carry it a kilometre, the weight of those shopping bags is demonstratively more, and slowing you down by the time you get to the car.”

Allocated weights factor in the weight of the jockey, plus all their riding gear, excluding safety equipment.

“It doesn’t include the jockey’s safety vest or helmet, or the bridle and bandages, those sorts of things,” Carpenter says.

“But if a horse is carrying 57 kilograms in a Melbourne Cup, like Incentivise, his jockey Brett Prebble … if he’s 54 kilograms, then there will be 3 kilograms of gear he will carry atop the horse.”

All saddles have pouches, allowing jockeys to add lead weights to them to make up the weight they must carry in a race.

It means a jockey with, for example, eight rides on Melbourne Cup Day must only be lighter than their lightest ride. They can make up the difference on their “heavier” rides by putting weights in their saddles.

What does ‘beating the handicapper’ mean?

“‘Beating the handicapper’ is a very rare term,” jokes Carpenter, who will clock 40 years as a racing administrator this month – 38 of those as a handicapper.

Carpenter quips that the term is often used after the race, and rarely before it. But often the best way to beat the handicapper is to put a lightly raced horse with high ability into a race, knowing the handicapper hasn’t yet had a chance to impose a high handicap rating.

Cross Counter, the 2018 Melbourne Cup winner, is an interesting case study when it comes to any attempt to beat a handicapper such as Carpenter. 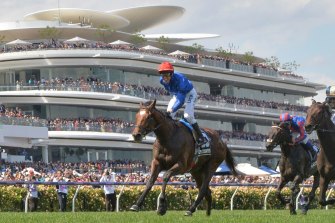 That horse, a European galloper trained out of the UK, had only had seven races leading up to the Cup, and his best performance was a group 3 win at Goodwood.

The northern hemisphere-bred three-year-old had not competed in elite, group 1 races prior to the Melbourne Cup and had avoided a high handicap rating, sneaking into the field with 51 kilograms.

He won that year’s race, but when he returned a year later, he was forced to lug 57.5 kilograms to reflect not only that performance and a subsequent Dubai Gold Cup win, but his added maturity as a four-year-old.