A dead rubber against England at the MCG is very much alive for Marnus Labuschagne, as he seeks to find the right tempo for white-ball batting that will enable him to establish a permanent place in Australia’s 50-over plans.

Mitchell Starc is resting from the game but Pat Cummins will be back as the captain, after Josh Hazlewood took the reins at the SCG.

The possibility of a lively MCG pitch similar to those prepared for the Twenty20 World Cup is ideally suited to Labuschagne’s melding of Test match technique and limited overs creativity, but in the bigger picture there are still a few things the 28-year-old needs to put beyond doubt. 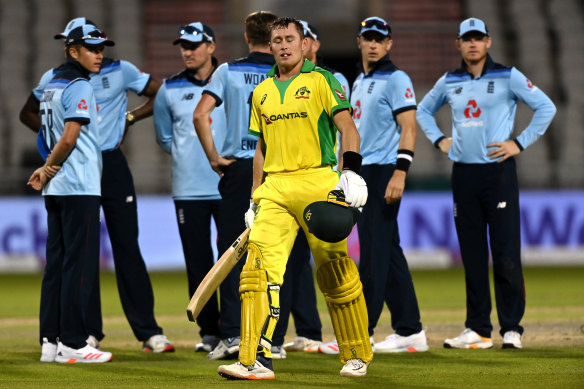 During top-end games against Zimbabwe, Labuschagne found himself behind the likes of Mitch Marsh and Marcus Stoinis in the team’s order of preference, and when Aaron Finch retired it was Travis Head who slotted in as David Warner’s opening partner.

These decisions essentially related back to the pace of Labuschagne’s scoring, and the view that with Steve Smith at No.3, the team did not need another player in the middle order to score at a similar, medium tempo level.

A swift 58 from 55 balls at the SCG on Saturday night was a good start – one of only four occasions out of 25 innings where Labuschagne has scored at a strike rate of 100 or better in an ODI knock of substance.

“That No.4 role is a bit unique because the tempo of that role is a little bit higher than the No.3 position,” Labuschagne said. “So for me it’s about being able to read the game and trying to play consistently that higher tempo.

“Understanding if the wicket is tougher to bat on, then I’ve got that Test gear I can lock into and understand a little better that a little bit of hard work here, and we’ll back end it with our five, six, seven, eight.

“The other day my role was to pick the tempo up and Steve wasn’t going as fast and that’s where we complement each other. I may be the one who’s not striking as quick and he’ll pick up the slack and vice versa.”

The example Labuschagne will keep close in mind is how, against Moeen Ali in Sydney, he clattered his second ball for his first six in ODIs, and then also hammered a four from his sixth.

“Looking for a boundary early on is really good,” he said. “If there’s an opportunity like the other night – where they had mid-on or mid-off up, no one out, the Powerplay, an off-spinner bowling – it didn’t matter that it was my second ball, that opportunity came up and I took that option on.

”That’s the sort of energy and confidence I want to be playing consistently. And that’s what makes a difference. It’s more on myself to trust to take the game on early. I’ve always been comfortable that once you’re in, taking the game on, but the way the one-day game is moulding, you probably don’t have as much time to just sit on it, so you’ve got to trust yourself a bit more.

“That comes with understanding risk and where you can take the game on. I don’t think it’s giving me an excuse to be reckless, it’s still calculated, understanding where I can hit certain bowlers and what are my best scoring options.”