The issue of the use of the whip in British racing is being put to the public as the British Horseracing Authority (BHA) launches a 10-week consultation period.

The consultation aims to gather and assess the viewpoints of industry participants, non-industry stakeholders and wider public audiences, regarding rules, usage and penalties related to the whip.

In British racing, the whip used is foam-padded and was designed with input from the RSPCA, and its use in races is subject to strict controls, but has been the subject of much debate.

At Royal Ascot this year, jockey William Buick was given an 11-day suspension and a fine of £1,150 for his use of the whip during a winning ride on Reshoun in the Ascot Stakes.

Views and suggestions from the consultation will be considered by the newly-formed Whip Consultation Steering Group, which includes leading trainer John Gosden plus jockeys Tom Scudamore and PJ McDonald. 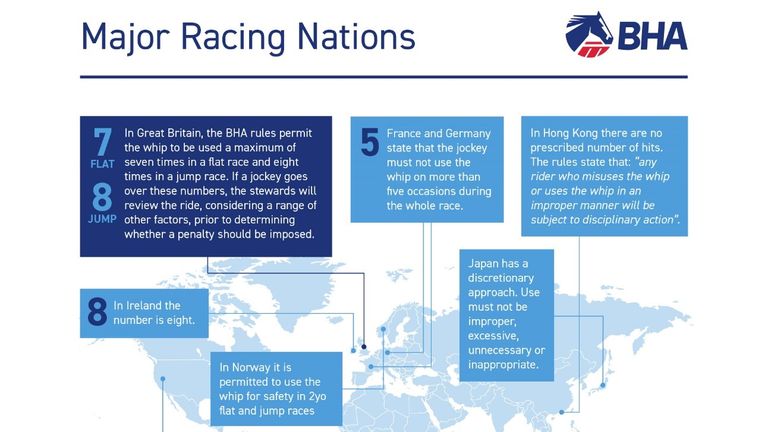 Recommendations will undergo further engagement prior to being presented to the BHA Board for consideration and approval in early 2022.

Julie Harrington, Chief Executive of the BHA, said: “At a time when societal and political views are constantly changing, the future health of our sport will depend in part on the maintenance of social licence and the trust that the public and politicians have in us.

What the consulation asks

Whether disqualification should be considered as a penalty for rule breaches

Whether international rules should be harmonised

“The racing industry must be willing to listen to and understand a range of perspectives if it is to prosper and safeguard its long-term future.

“Moreover, we must have rules and a penalty structure which are viewed as fair to participants and the betting public, which encourage riding within the rules and which deter rule breaches.

“By carrying out this consultation we are looking to signal and facilitate a positive, open debate about this important issue for our sport from the viewpoint of perception and fairness.

“We encourage everyone with an interest in the subject to take part in the consultation. This is your opportunity to be heard.”