Resilience. Players who have it thrive when the chips are down; players who don't get eaten up by the occasion or the expectations and are spat out, never to feature again. OK, maybe that's a bit dramatic, but you get the idea.

Australian coach Matthew Mott and his support team will find out if his group of players are resilient when they take on Sri Lanka on Monday. The Australians didn't have the perfect start to their World Cup campaign. The No.1 side struggled to chase down India’s total of 132 on a pitch that had low, slow sub-continental qualities. 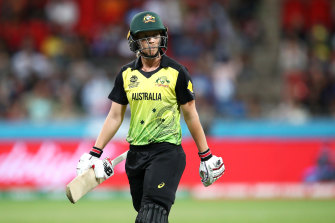 Meg Lanning and the Australians need to kick-start their World Cup campaign against Sri Lanka after losing to India on Friday night.Credit:Getty Images

On arrival in Perth, captain Meg Lanning was saying all the right things. "Cricket is a very up and down game. There are highs and lows all the time and you have to get used to it as a cricketer. Every World Cup that I have been involved in, we have lost a game in the group stages. You need to be able to bounce back."

While it wouldn't be panic stations in the Australian team, I wouldn't be surprised if a few players start to let doubts creep into their minds. Thankfully, the Australians have chosen to travel with sports psychologist Peter Clarke, who will play an important role in keeping players in the here and now. As an athlete you can be easily be consumed by past performances, or look too far into the future, not to mention get caught up in the gravity of a home World Cup. The best place to be is in the present, where you can control the outcome.

One player who has already shown resilience is Alyssa Healy. Player of the Tournament in the previous edition of the T20 World Cup in 2018, her build-up to this tournament was a string of single-figure scores, the most in her entire career. Given the task to go at the bowlers from ball one, it is difficult when luck hasn't been on your side. On the opening night of the tournament, Healy was able to find the middle of the bat and, more importantly, the gaps to get Australia off to a good start.

Sri Lanka, No.8 in the world, have already shown that they are team that you can't take lightly. In the warm-up fixtures, they took out one of the top contenders for the title, England, by chasing down their modest total of 122 without losing a wicket.

The star that day was their captain, Chamari Atapattu, who clubbed an unbeaten 78 runs off 50 deliveries and also collected 3-21. Atapattu is no stranger to the Australian side and has inflicted many a nightmare for Lanning and her bowlers. In the 2017 50-over World Cup, Atapattu scored an unbeaten 178 that included 22 fours and six sixes. As recently as the start of the Australian summer, she scored 113 off 66 deliveries.

An area that Australia will look to improve is their middle order, who succumbed to Indian leg spinner Poonam Yadav's guile. Sri Lanka don't have the class of Yadav however their spin contingent of Siriwardena, Atapattu, Kumari and Dilhari have the ability to squeeze the Australian side.

In group A, known as the "group of death," there are no easy matches for Australia. The equation is simple: just win every game to ensure that they are in the top two of their pool to progress to the semi-finals.

Both teams can expect favourable batting conditions, with the extra pace and bounce synonymous with the WACA pitch and a fast outfield. If Atapattu and her fellow top order batters get on a roll, and with Australia having already dropped their first match, the home side will need to show gritty determination to get the campaign back on track.

Fast bowler Jhye Richardson didn’t want to have high expectations for the IPL auction, before a result which left him numb

LAWRENCE BOOTH: Can England stop the rot in the second Ashes Test?