Australia’s heir apparent behind the stumps, Alex Carey, has declared he is ready to play Test cricket should he be needed in South Africa despite a dearth of red-ball matches.

In an indication of his desire to wear the baggy green, the South Australia stumper says he would rather be in South Africa on reserve than taking the field on the concurrent Twenty20 tour of New Zealand. 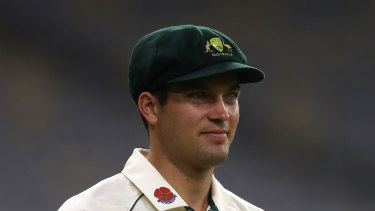 Alex Carey is prioritising the Test tour of South Africa over the T20 series in New Zealand.Credit:Getty Images

Carey would be in the box seat to tour South Africa as Paine’s understudy if the underperforming Wade is to be dumped. If Carey misses out, he would be a strong chance to regain the gloves for the T20 side, having lost his place to Wade on the August/September tour of England.

“My ultimate goal is to represent Australia at the highest level – that’s Test cricket,” Carey said on Friday, a day after smashing a century in the Big Bash League for the Adelaide Strikers.

“If I was to go on a tour and warm the bench then so be it.

“If I’m selected to play in any Australian team it’s a great opportunity and I’d be really honoured to do that in any format.

“I think Test cricket is the pinnacle of the sport.”

Carey has scarcely played a red-ball game in the past three seasons, featuring in just six Shield games since the start of the 2018-19 summer due to commitments with the national limited-overs teams.

His only first-class game this season came for Australia A. If he was to be picked on a tour, his next Shield match may not come until next season.

Carey, however, believes he is ready for the step up if needed by selectors.

“In saying that, I won’t know until I do play Test cricket.”

Released by Indian Premier League franchise the Delhi Capitals, Carey is contemplating whether to nominate for the player auction or to make himself available for a county deal so he can enhance his Test claims.

“It’s something I have to sit down and think about what might be beneficial for my cricket,” Carey said.

“We understand it’s an amazing tournament. The best players normally go over there and play. It’s a strong competition. If you’re playing the best in the world it’s only going to benefit your cricket. It’s a good question, it’s something I’m going through now to decide if Im going to put my name up in the auction. Who knows? I might not get picked up anyway.

“There’s the possibility of more Shield cricket and maybe some red-ball cricket in England if someone wants to put me on a contract there.”

Olly Murphy keen to see his team progress next season