For every Cadel Evans and Michael Matthews success story, there are more kids with stars in their eyes.

So take a moment to ponder what it will mean for Australian cycling when the UCI road world championships descend on Wollongong from September 18-25.

This is cycling’s FIFA World Cup. How else can I compare it? This is cycling’s Olympic Games. I believe it’s more of an achievement to win the rainbow jersey in the elite men’s and women’s road races than it is to win an Olympic gold medal.

The mainstream understands the Tour de France, a staple on Australian television since the 1980s. The riders that are coming here for the worlds will be familiar to Australian viewers because they race for their professional teams in the Grand Tours, the Tour de France, the Giro d’Italia, the Vuelta a España.

Think names like two-time defending champion Julian Alaphilippe, a swashbuckling Frenchman who has won many stages of the Tour de France and held the yellow jersey. Or Wout van Aert, the Belgian who conquered the green sprinter’s jersey in this year’s Tour. Among Australia’s great hopes are Matthews, Giro d’Italia champion Jai Hindley, and a rider destined to make amends for a slow year in Ben O’Connor. 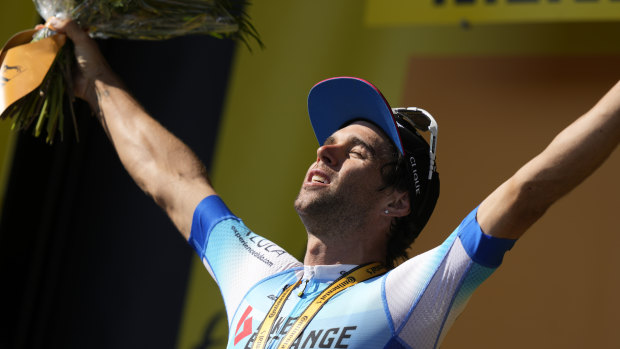 Apart from the Olympics every four years, only in this event they will not be representing their professional teams. They will be riding for their nations with a crowd of up to 350,000 expected to line the streets of Wollongong for what I believe is the biggest international event to come to Australia this year.

Cycling is huge around the world; it’s up there with Formula One, golf, tennis and world football. I say this without a hint of hyperbole. If you go to Europe, you will realise cycling is up there with those sports.

It’s a huge result for cycling in Australia. Cycling in this country is getting bigger and better as a result of the Australians who have dominated the world tour during the past 25 years. Think Robbie McEwen, Stuart O’Grady, Brad McGee, Baden Cooke, Cadel Evans, Michael Matthews, Caleb Ewan, Simon Gerrans. All have dominated on the world stage, at one time or another, and enjoyed success.

‘It’s more of an achievement to win the rainbow jersey than it is to win an Olympic gold medal.’

The course that awaits this cast is unforgiving. It’s not a sprinter’s course, instead one that will separate those who can climb from those who can’t. They must climb Mount Keira once, which rises to an altitude of about 400 metres. Awaiting them as they filter back into the suburbs of Wollongong is Mount Pleasant, which will be anything but. It’s a one-kilometre climb the riders will have to scale 12 times. I’ve climbed it myself, and it really is a brutal loop.

The elite women’s road race stretches over 164.3 kilometres. The men’s road race is 266.9 kilometres. It’s effectively the same distance as Sydney to Canberra, and it’s not a flat road. To complete such a distance on an undulating course in a matter of hours is brutal. As for us weekend warriors who may do 80 to 100 kilometres on a Saturday or a Sunday, you can do the maths. It’s like chalk and cheese.

Yet for every person who deems it too brutal, there will be a kid left inspired. That’s the spin-off of this event.

The youngsters coming through with stars in their eyes will be a result of what’s going to happen in Wollongong in September.