Australian captain Aaron Finch hopes a strong performance in the Twenty20 series against England can provide "positive headlines" after a tumultuous winter and at a time when the governing body is now mired in an ugly battle with its host broadcasters.

Seven West Media and Foxtel are agitating for a reduction in rights fees because of concerns the Big Bash League won't provide the quality they claim they signed on for. There is likely to be dilution in Australian talent because of the need for an expanded Australian squad to cover for biosecurity bubbles for the Test series against India. 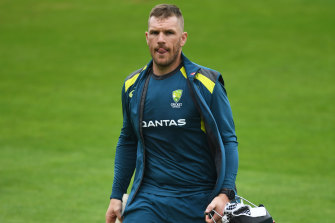 Aaron Finch is glad for the return of cricket.Credit:Getty Images

Finch has been the face of the Melbourne Renegades and one of the major selling points of the BBL since it was born a decade ago. The competition has been under the microscope since Channel 10, which turned it into compelling viewing, lost the broadcast rights and they were sold to Seven West Media and Foxtel in 2018 along with international matches in Australia for $1.18 billion. A decision to increase the number of BBL matches each team plays from 10 to 14 remains problematic.

"I know it's going to be a little bit different this year with COVID and the potential for hubs and things like that that will change the outlook of it but all in all I think going from 10 to 14 was probably a little bit too much of a drastic jump straightaway," Finch said.

"Maybe there was a middle ground there for 12 and trial that for a middle period but it's still a great product and something that we are proud of."

Finch's immediate focus is the first of three Twenty20 matches against England at Southampton, beginning Saturday (3am AEST), which shapes as a free-flowing clash. It pits No.1-ranked Australia against the nation just below it on what is likely to be an excellent batting deck.

The Australians have won nine of their past 11 Twenty20 matches, their victories bankrolled by the heavy hitting of Finch, David Warner, Steve Smith and Glenn Maxwell.

Marnus Labuschagne is seeking to become a three-format player, and produced what coach Justin Langer said was a “sublime” century in the final Twenty20 warm-up clash on Tuesday. However, he has played only 10 domestic Twenty20 matches, and Finch all but confirmed he would not play in the opening match.

"He played nicely the other day but I think he might have to wait a little bit longer in T20 cricket," Finch said.

Finch said the Australian and England players wouldn't take a knee in support of the Black Lives Matter movement, declaring education was the key.

"We are really proud to play a game where it is celebrated all around the world and anyone can play it. It doesn't matter what race, what religion, what nationality you are from, cricket is the game for everyone. Education is far more important than the protest," Finch said.

ECB postpone The Hundred until 2021 due to coronavirus pandemic