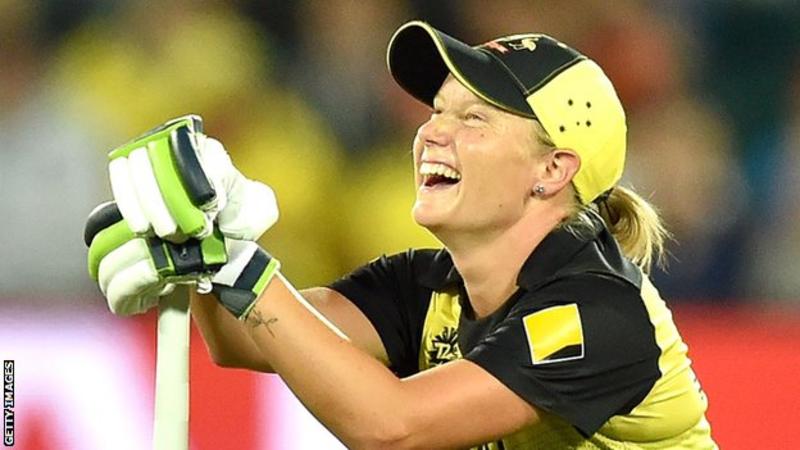 Mooney struck an unbeaten 81 and Healy an astonishing 83 as the two shared a brutal 151-run opening partnership.

Healy was the only batter to fall for Australia, but Ashleigh Gardner’s unbeaten 22 from nine balls powered the defending champions to 189-1 at Manuka Oval.

Bangladesh could only reach 103-9 from their attritional 20 overs, with seamer Megan Schutt taking 3-21.

Australia are close to qualifying for the knockout stages, thanks to their emphatic margin of victory in Canberra and India’s win over New Zealand earlier on Thursday.

The hosts’ final group game is against New Zealand in Melbourne on Monday, while Bangladesh play the same side on Saturday, also at Junction Oval.

Australia stumbled with the bat against Sri Lanka but Healy attacked from the off, driving the first ball of the innings to the ropes.

Healy’s form has been up and down during the Australian summer but this was a timely reminder of the power she has, with the wicketkeeper striking 10 fours and three sixes from 53 balls.

She hit back-to-back sixes to reach her half-century – the second a huge flog over cow corner that cleared the advertising boards – and reaching triple figures felt almost inevitable.

Healy was left fuming, however, after she cut a nondescript delivery from Salma Khatun to the waiting fielder at point.

Bangladesh were poor on the field – there were several easy dropped catches, including Mooney who was put down at long-off on 56 – but Mooney played strongly around the ground, while Gardner’s three fours and one six ensured Australia ended the innings with a bang.

In truth, Bangladesh were never in the chase, and it took until the 12th over for them to start hitting out.

Fargane Hoque Pinky top-scored for Bangladesh with 36 from 35 balls, but the total was always out of their grasp, and a chaotic final over summed up their approach.

Two run-outs in two balls, including one where the captain Salma Khatun was left standing in the middle of the pitch, unaware of where the ball was, capped off a disappointing finish for Bangladesh.

‘It was good all-round performance’

Australia captain Meg Lanning: “It was good all-round performance. Alyssa Healy and Beth Mooney set the tone right from the first ball. We wanted to go out there and be really attacking. We were a little timid in our first two games.”

On their next game against New Zealand: “It’s going to be great. World Cups are all about big games and I want to be a part of them. It’s pretty much a quarter-final. New Zealand are playing good cricket so it’s going to be a good game.”

Player of the match Alyssa Healy, who scored 83 from 53 balls: “We haven’t really been taking the game to the opposition so we decided to take them on today and it got us off to a good start. We figured a lot of the subcontinent teams will bowl as slow as possible to us so we did a lot practice in the nets. It didn’t feel easy batting out there but to get a big total felt good.

“Batting with Beth Mooney makes it a lot easier. With the breeze across the ground we could identify whatever end was best for us. We seem to work really well together.”

Bangladesh captain Salma Khatun: “Australia are a very good team and I think 190 was too big a total. They bowled a good line and length and it was very hard for us. We now move on and look forward to the New Zealand match.”

England spinner Alex Hartley on BBC Test Match Special: “A fantastic performance with the bat, and absolutely clinical in the field. Just the performance Australia needed.”