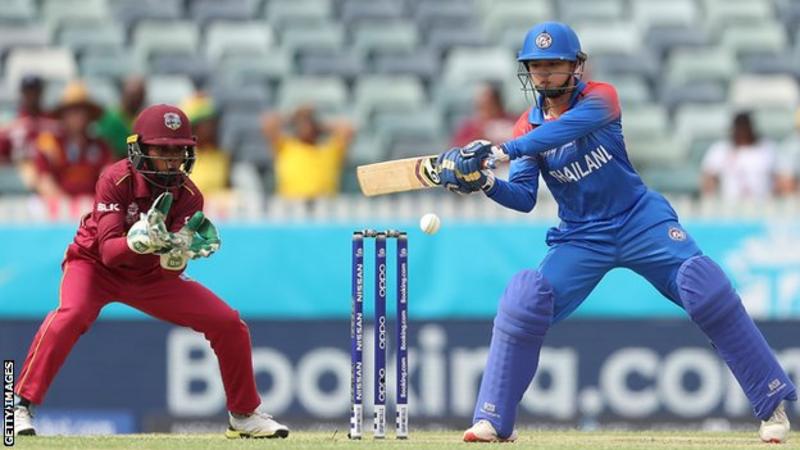 Thailand gave West Indies a scare before being beaten by seven wickets on their global debut at the Women’s T20 World Cup in Perth.

Thailand, who came through qualifying last year, made 78-9 from their 20 overs, with spinner Stafanie Taylor taking 3-13.

But Shemaine Campbelle overturned an lbw decision to ensure she and captain Taylor got Windies over the line with 20 balls remaining.

A better batting performance from Thailand could have made this a more nervous finish for West Indies.

Their fielding was sharp, with two run-outs worrying West Indies as they stumbled chasing a very gettable total.

However, Campbelle and Taylor’s calm heads, steadying the rate before hitting out to settle nerves, ensured the Windies got over the line.

Thailand are next in action against England in Canberra on Wednesday (04:00 GMT), before West Indies play Pakistan afterwards (08:00).

Thailand’s players have said they are not in Australia just to make up the numbers. They are a team who have been together for many years, and they held training camps in Australia to acclimatise.

The lack of power in their batting has always been a concern and their batters fell trying to force the run-rate in the final 10 overs.

Their second boundary off the bat came at the start of the fourth over. The third came 12 overs later, from the penultimate ball of the innings.

Teenage wicketkeeper Nannapat Koncharoenkai did her best to anchor the innings, making 33 from 48 balls, but she fell nine balls before the end as Thailand floundered.

Their fielding was outstanding, and their spin bowlers kept the run rate tight in the middle overs.

Thailand should not be patronised during this tournament – while it is a step-up in quality, they will know that they should have done more with the bat in this game.

Windies win – but not convincingly

West Indies are the only team apart from Australia and England to win this tournament – previously known as the World Twenty20 – but they will need more convincing performances with the bat.

Kirby in particular was poor, growing frustrated against the Thai spinners. Her stodgy innings was ended in spectacular fashion by Chaiwai, who hit the stumps from short third man to spark wild celebrations among the players.

When Hayley Matthews was bowled trying to pull, and Deandra Dottin run out, West Indies looked in real trouble.

The experienced Taylor hit three fours and Campbelle four as they raced towards their total, but with England in their group and Pakistan’s spin-heavy attack also waiting, their batting could be exploited by other teams.

‘Beers over Skype’: NSW win Sheffield Shield without having to take the field

Pakistan well-prepared and primed to cause England problems again