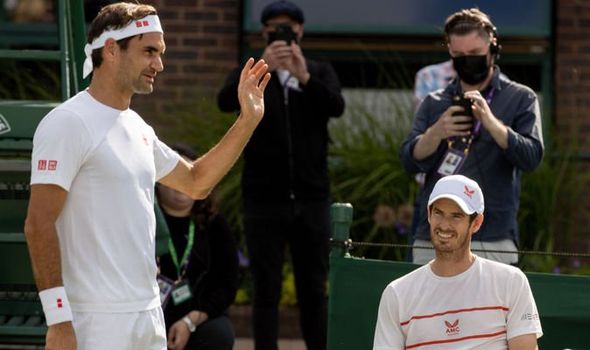 Wimbledon legends Roger Federer and Andy Murray warmed up for this year’s Championships by hitting together on an outside court today. The Swiss and the Scot spent an hour practising on Court 14 at 5pm.

Word quickly got around the All England Club and a crowd of media and staff soon gathered around the court.

Murray was leading 6-5 in games at the end of the intensive one-hour session.

Two-time champion Murray will play his first singles match since 2017 at Wimbledon on Monday against No.24 seed Nikoloz Basilashvili.

And eight-time winner Federer, who pulled out of the French Open after three matches, is on the other side of the draw so he will face Frenchman Adrian Mannarino on Tuesday.

The Swiss superstar will turn 40 in August and will play his first match at Wimbledon since losing the epic 2019 final to Novak Djokovic in a final-set tiebreak. 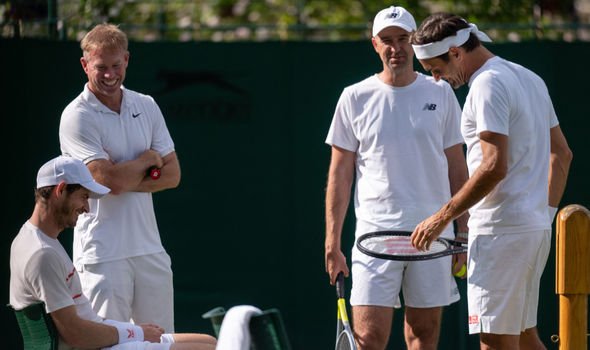 Djokovic has the chance to draw level with the male record of 20 Grand Slam singles titles jointly held by Federer and Rafa Nadal on July 11.

The Australian Open champion won the French Open title earlier this month to move to 19 – and take a second step towards a potential golden calendar Grand Slam.

Even Nadal’s uncle and former coach Toni Nadal believes Djokovic is now likely to finish his career with the record.

“The truth is that before Roland Garros I saw Rafael [as the favourite], now the subject has changed a bit,” the Spaniard told Marca.

“I wrote that the next Wimbledon and US Open are going to define things a bit because I understand that each year it will be more difficult to win.”

The Serb will play the first match on Centre Court at 1.30pm on Monday against British wildcard Jack Draper.

The son of the former head of the LTA said: “I am very excited to be playing on the biggest stage in tennis against the Wimbledon defending champion and the world No.1. I am looking forward to getting out there on Monday.”

British No.1 Dan Evans, who is seeded at Wimbledon for the first time at No.22, faces a tricky opening tie against Spaniard Feliciano Lopez. And No.29 seed Cam Norrie will play Lucas Pouille.

No.27 seed Jo Konta will start against world No.76 Katerina Siniakova, but she is on collision course to face world No.3 Ash Barty in the third round.

Wimbledon, which was cancelled for the first time since the Second World War last year, starts on Monday.
Source: Read Full Article