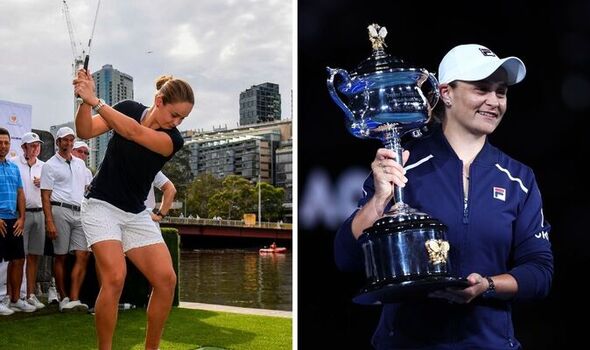 World No 1 Ash Barty has already won her first non-tennis tournament just 11 days after retiring from the sport. The Aussie will give up her top ranking when the list is updated on Monday, having hung up her racket aged just 25. Having won the Australian Open at the start of the year before retiring, she has now won a golf tournament in her home country and picked up a £17 prize cheque.

Barty stunned the tennis world when she announced she would be retiring with immediate effect on March 22. As the current WTA world No 1 and reigning Wimbledon and Australian Open champion the news came as a shock but the 25-year-old said she didn’t “have the physical drive, the emotional want and everything it takes to challenge yourself at the very top of the level any more.”

The Queenslander had already taken a break from the sport earlier in her career, going to play Big Bash cricket before returning to tennis, and is something of an all-rounder when it comes to sport. Former world No 1 and one of Barty’s good friends on tour, Simona Halep, joked that Barty would go on to become a golf champion after quitting tennis and it seems her prediction has already come true.

On Saturday, the 25-year-old picked up her first trophy since becoming the Aussie Open champion in January at the Brookwater Golf and Country Club ladies event. After shooting a round of 34, Barty came first place at the club tournament and picked up a winners cheque in the process.

JUST IN: Djokovic and Nadal warned about world No 1 spot by Carlos Alcaraz

The three-time Major champion, who has picked up around £18,000,000 over the course of her tennis career, was awarded a £17 (AUD$30) prize for winning the golf tournament less than two weeks after retiring from professional tennis. It’s a far cry from the £1,650,000 (AUD$2,875,000) she received when she was crowned the Australian Open champion in January.

And it’s not the first time Barty has won the club golf event either, she picked up the title back in 2020. It comes as no surprise to many in the Australian golfing community, with the 25-year-old known for her ability, carrying a zero handicap.

As well as Halep’s recent joke about Barty going on to become “a Grand Slam champion in golf”, World Golf Hall of Famer Karrie Webb, who will captain Australia’s golf teams at the 2024 Paris Olympics, admitted she could see the 25-year-old turning to a golf career.

“I don’t see Ash wanting to do a sport where she has to travel the world, I think that’s part of what she didn’t like about tennis, being away from Australia. [But] I wouldn’t put it past her to be Australian amateur champion one day,” she said.

For Serena Williams and Naomi Osaka, nothing but respect — and a desire to win